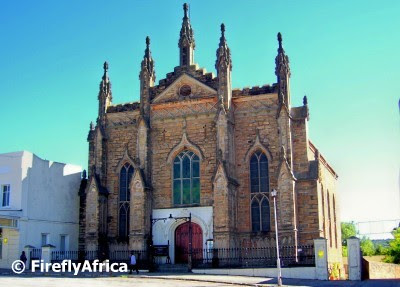 The Commemorative Methodist Church, or as the locals call it The Commem, stands at the bottom of church square in the beautiful Eastern Cape town of Grahamstown. The church was completed in 1850 and was built along the Gothic Revival lines which was very "in" at that stage. 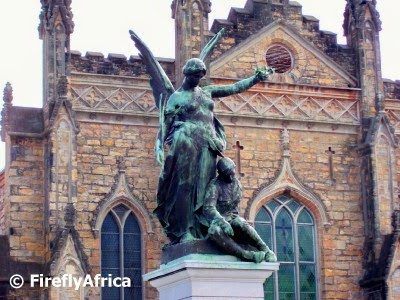 In front of the church stands the statue of the Winged Angel of Peace supporting a dying soldier,
which commemorates those who have fallen in the Anglo Boer War (1899 - 1902). This site was chosen as it is situated "in the mids of our daily work" and would be seen often, serving as a inspiration of peace. 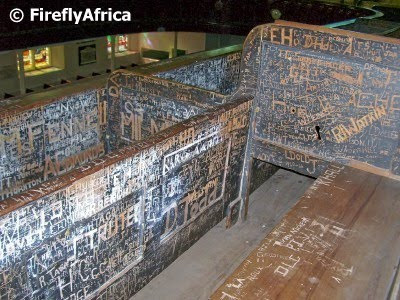 The church seats 1200 people with seating downstairs as well as on a gallery. A very interesting and curious feature of the church is all the graffiti on the pews up on the mezzanine. The boys from nearby Kingswood Collage use to come to the church for services until they got their own chapel in the 1950's. It became a tradition to carve out your name in the wood. in 1872 the church employed a law man to try and catch the kids doing it, but that never worked and the tradition lived on. 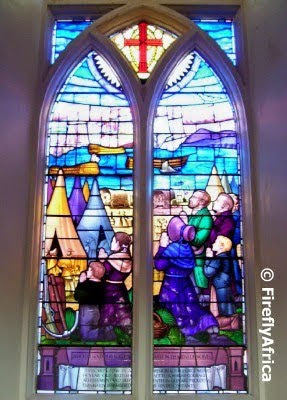 The church has a number of beautiful stained glass windows, this one showing the British Settlers giving thanks for their safe arrival from England to the Cape Colony. The church also has several ornate plaques honouring the lives of past members of the church.