Looking out the museum doorway 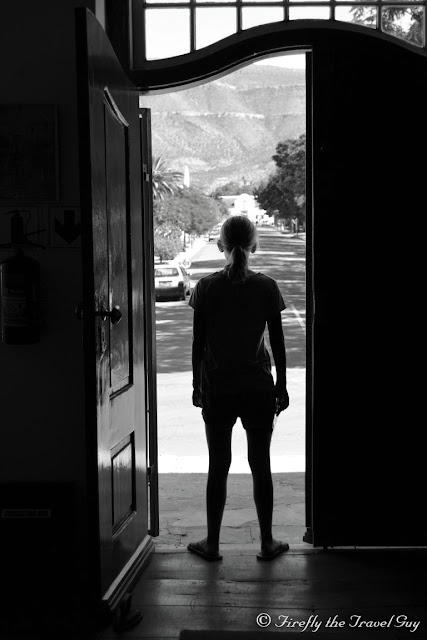 I'm finally busy going through and editing the pictures I took in Graaff-Reinet a few weekends ago and will start posting about our visit shortly.  One of the photos I found was this one of Miggie standing in the door at the Reinet House museum looking up towards the Drostdy Hotel.  She clearly likes being outdoors a lot more than going through museums.
Posted by Firefly the Travel Guy at 1:00 PM 1 comment:

"We still Bezzy for the Moument" 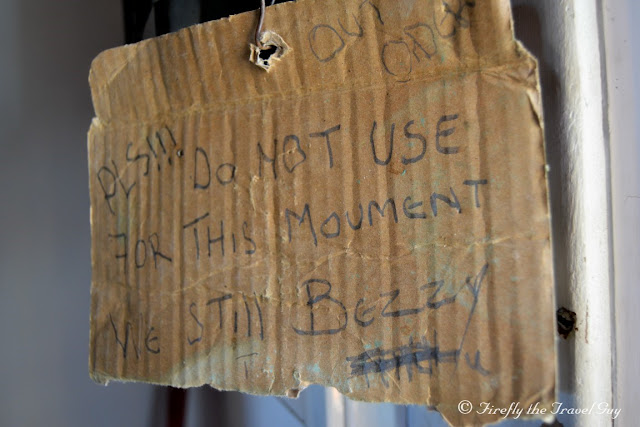 A walk around the Reinet House Museum in Graaff-Reinet recently had me wander into the mill house in the backyard.  They're currently busy with restoration work and a hand written sign on a piece of torn off cardboard caught my eye.  I just had to snicker. Clearly somebody asked one of the Afrikaans workers doing the restoration to just put up a sign so that people don't fidget with the mechanism and this was the result.  No, I'm not being a Grammar Nazi, I just love the simplicity of it .
Posted by Firefly the Travel Guy at 3:25 PM No comments:

Email ThisBlogThis!Share to TwitterShare to FacebookShare to Pinterest
Labels: signs

Patterns and textures at InniKloof

Hiking to the Waterfall at InniKoof outside Hankey wasn't just about the beautiful views and the waterfalls.  It was also about patterns, textures and colours.  Nature really offers us so much more than the big pictures.  I haven't done a Random ... post for a while so here is one.  Random patterns and textures from the InniKloof Waterfall Hike. 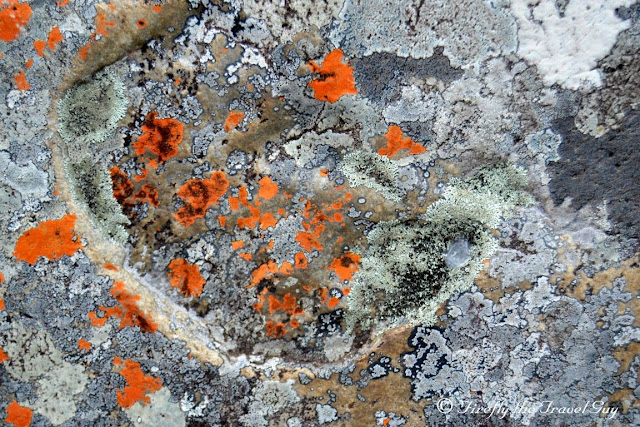 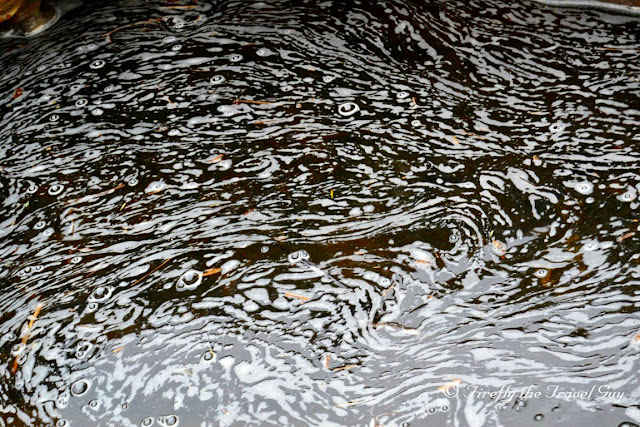 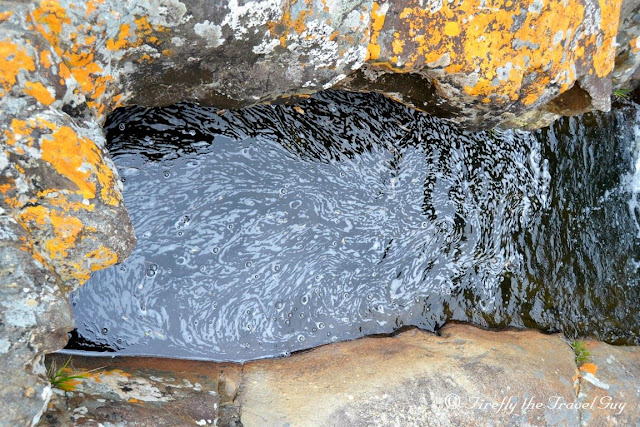 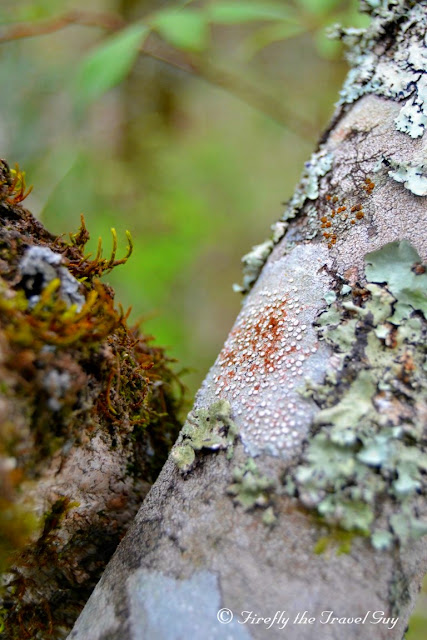 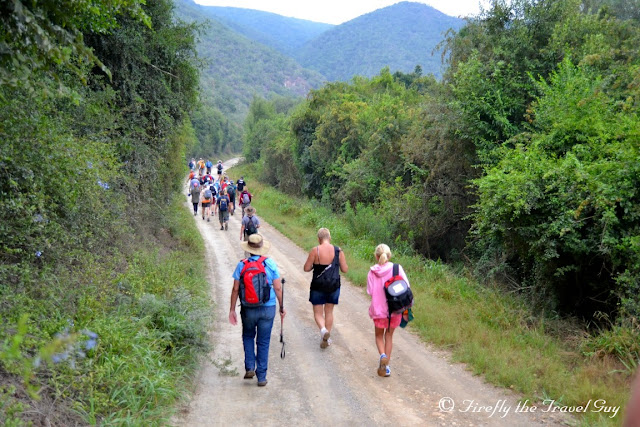 Everybody has their travel bucket lists.  I'm no different but because I would still like to do a lot of travelling I have divided mine into International, African, South African and Eastern Cape.  One of the things that has been on my Eastern Cape travel bucket list for a while now is doing the Innikloof Waterfall hike.  Innikloof is situated near the Gamtoos Valley town of Hankey and the hike is done once a month as a guided hike as it crosses private land and a conservation area.  The return walk is about 14 km long and well worth the effort, but don't kid yourself, it's not a walk in the park, like we found out.

Innikloof was the location of the annual Port Elizabeth Geocaching camping weekend this year and the Saturday was set aside to do the Waterfall Hike.  We could not spend the weekend so rushed out from Port Elizabeth  early morning to join our fellow cachers and InniKloof owner John Wait on the hike.  The first kilometer is an easy stroll down the road to warm up those calves and then the climbing started.  To get to the kloof the waterfall is in you have to literally go over the mountain.  Not around it, not through it, not underneath it, but over it.  The climb from the start wasn't too bad as it was a gradual one and by the time we arrived huffing and puffing at the top we enjoyed fantastic views back the way we came.  After a short walk along the top of the mountain I realised that we had lost Chaos Boy.  He walked ahead of the group when we stopped to take a breather and seemingly took a wrong turnoff.  I seemed to be the only one really worried and after about a frantic 30 minutes the message came along that he had found his way back just in time to link up with the back markers.  Hope he learned his lesson. 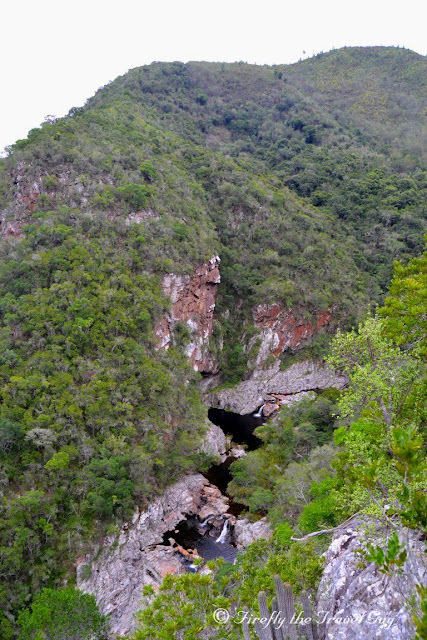 The view down towards where we were going was stunning.  You can see the river as well as a number of waterfalls and cascades below but this was also where the big challenge of the Waterfall Hike started.  Getting down the steep side of the mountain.  It is a descent of engaging one's diff lock, keeping the air brakes engaged and making sure you don't pick up speed too quickly.  Going down here you quickly realise that you will have to come back up and it won't be easy, but that was a hurdle to overcome later cause we started to hear the waterfall below us. 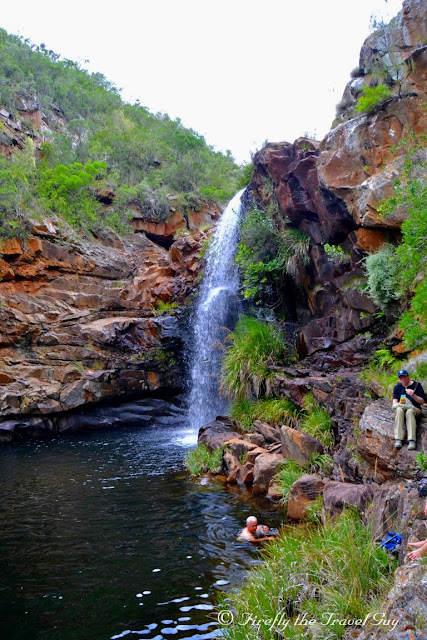 Once down at the bottom it's like a different world.  The waterfall flows into the dark pool below and being hot and sweaty after the walk there is only one thing to do... 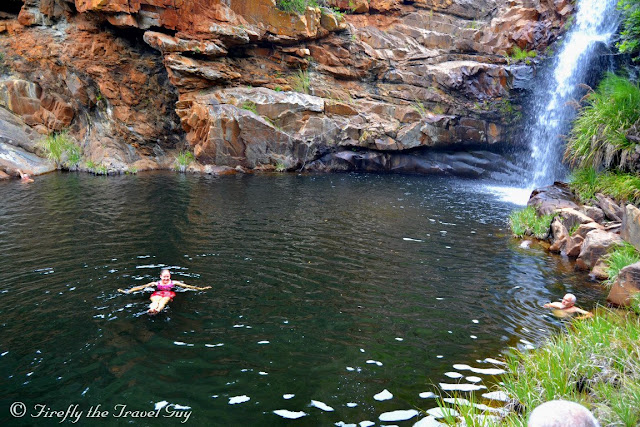 Clothes off, costume on and into the refreshing water.  Always refreshing to be able to swim in a mountain pool like this. 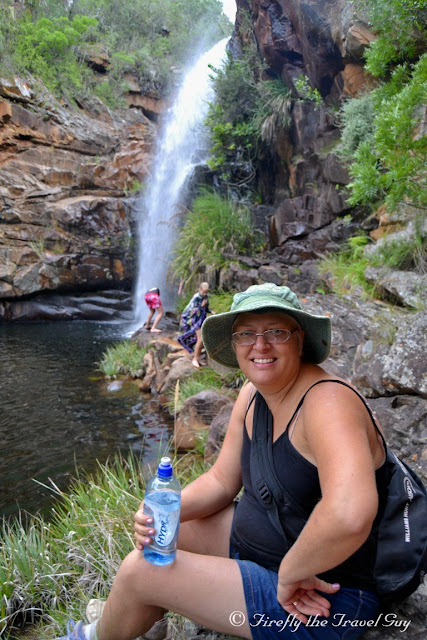 The Damselfly chose not to swim, but did fill her bottle from the waterfall.
Nice cold water for the journey back. 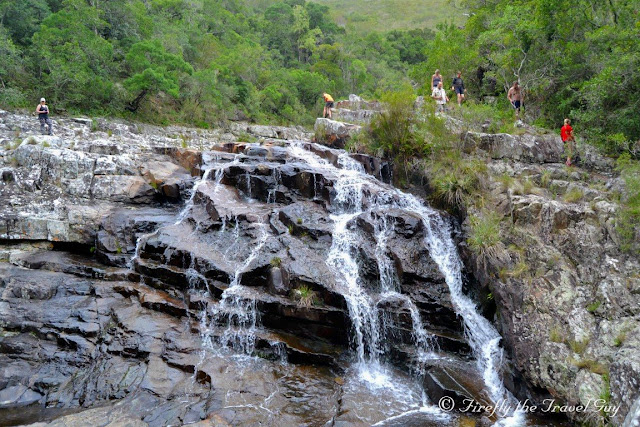 Before starting back though John took us a little further down the river to see the falls and cascades we noticed from the top.  Although the stream is a bit low due to the drought it was still a great sight. 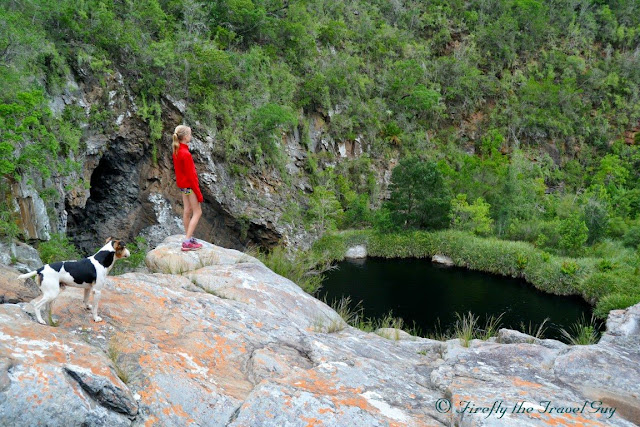 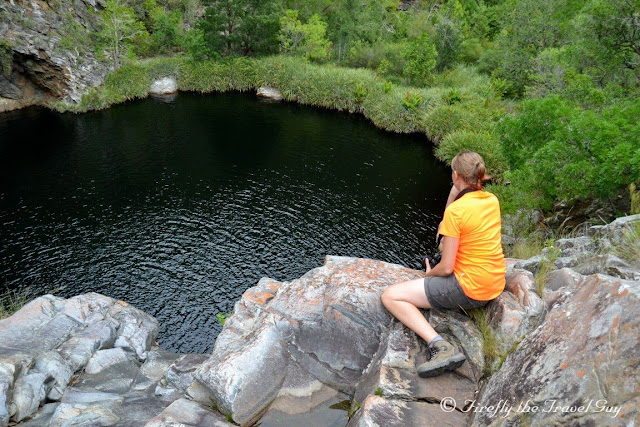 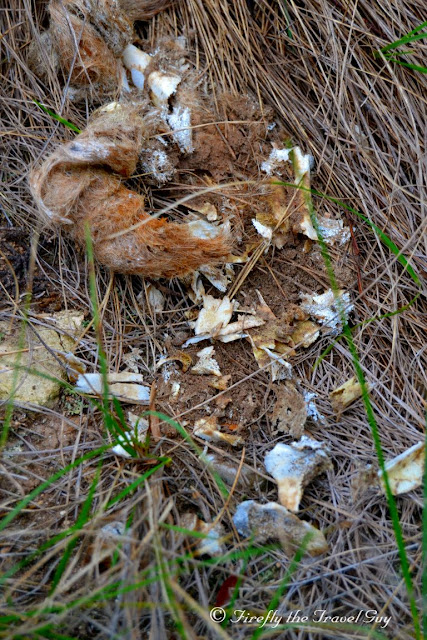 As we started our journey back up the mountain side we found the dried out feces containing a lot of bones and fur.  My guess is leopard with the Cape Leopard still found in these mountains. 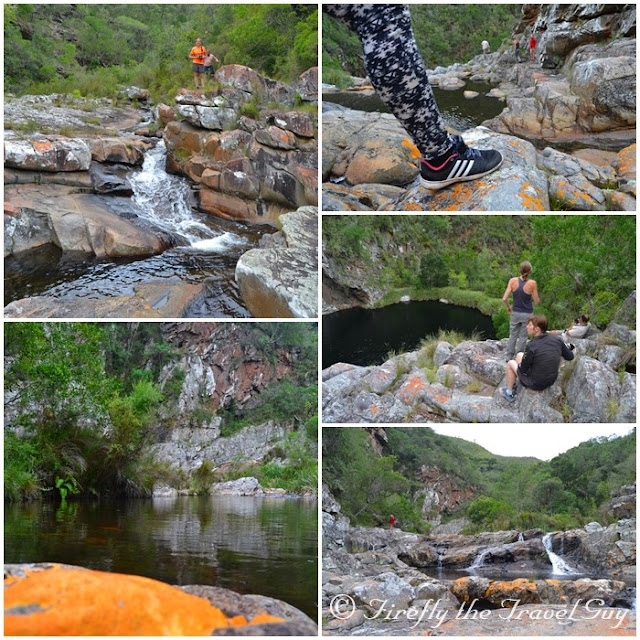 Just in conclusion.  As I said at the start, the InnKloof Waterfall hike isn't an easy one and not one to just pitch up for in slops and with a towel around the neck.  It's also not just a stroll down to the stream and you need to at least be used to walking a longer distance than just over to the corner shop.  We had a number of non-regular hikers in the group and they all completed it so don't let me scare you off.  I just want anybody considering doing this to be aware of the difficulty.  The views from the top as well as the end destination makes it all absolutely worth it so keep an eye on the InniKloof Facebook Page for more information about their monthly escorted Waterfall Hikes.  Another good suggestion.  Don't just go out for the hike like we had to do, but rather spend the weekend either camping or in a self catering chalet in this beautiful spot outside Hankey.  You won't be sorry.

Disclosure: We went on the hike as part of the Geocaching group and paid our own way.
Posted by Firefly the Travel Guy at 7:30 AM 3 comments: