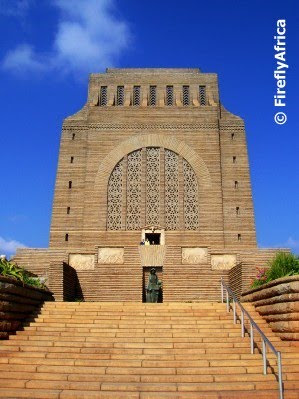 The Voortrekker Monument stands on top of a hill outside the city of Pretoria and can be seen from all directions as one approaches it. The monument was opened in 1949 and stands 40 meters long, 40 meters wide and 40 meters high. This massive granite structure was built in honour of the Voortrekkers who left the Cape Colony between 1835 and 1853 to get away from British rule and find land to call their own. 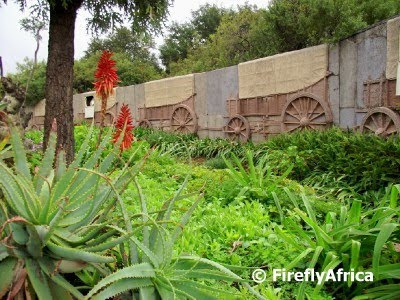 Surrounding the monument building is a circular wall of decorative granite and engraved with wagons. This represents the historical Trekker practice of "circling the wagons" to defend themselves when under attack. The wall consist of 64 ox-wagons which is the number of wagons used to form the laager at the Battle of Blood River. 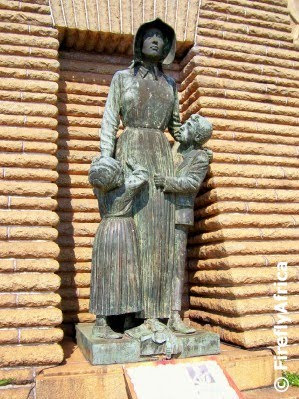 At the foot of the Monument stands a bronze sculpture of a Voortrekker woman and her two children by the well know South African sculptor Anton van Wouw. It pays homage to the strength and courage of the Voortrekker women who played as big a part in this historic event as the men. 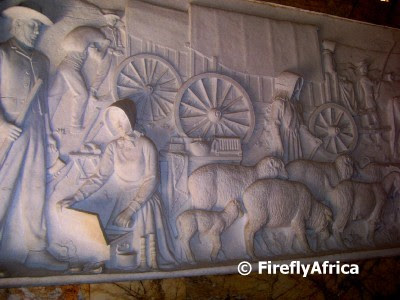 Inside the monument are three levels. On the entrance level (middle level) visitors will find the historical wall frieze. It represents the history of the Voortrekkers and depicts scenes that played itself off during the trek. Another feature of the monument is the Cenotaph on the bottom level of the monument and engraved with the words: "WE FOR YOU SOUTH-AFRICA". Once a year, at mid-day on the 16th of December, a ray of the sun shines through a hole in the dome to illuminate these words.
.
For more information on the monument, visit Wikipedia.
Posted by Firefly the Travel Guy at 2:00 PM