The views of Coffee Bay 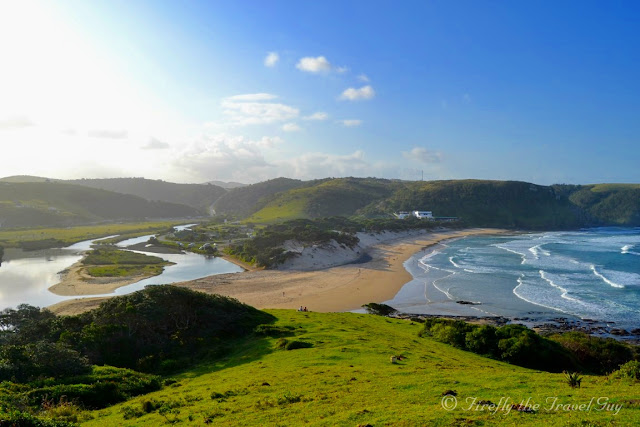 At the bottom of the beach in Coffee Bay is Bomvu Hill offering stunning views of both Coffee Bay to the north side and Bomvu Bay to the south. The village is located to the left just out of the picture next to the Nenga River.

Looking at the Coffee Bay view the white building at the top of the beach is the Ocean View Hotel where I have now stayed twice already.  Comfortable accommodation, great dinner buffet, direct access to the beach and they offer tours to Hole in the Wall.  I haven't had a chance to stay at one of the backpackers in Coffee Bay yet but would love to experience that side and vibe of it as well, but if you're looking for hotel accommodation in Coffee Bay then Ocean View is the way to go. 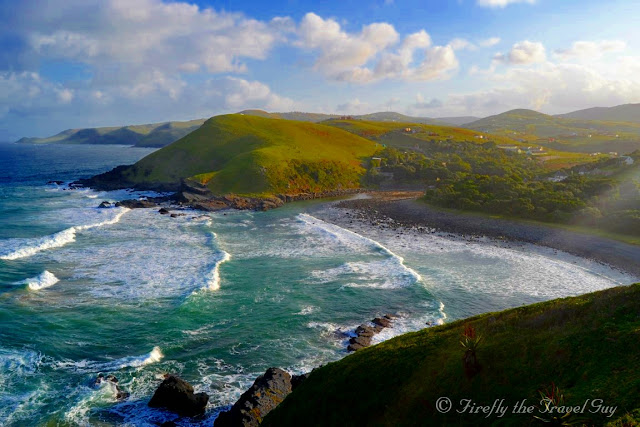 Looking south Hole in the Wall is about 7 or 8 kilometres down the coast.  Coffee Shack Backpackers is located just on the other side of the rocky beach below. To the left-hand side of the hill is virtually a sheer drop down to the Indian Ocean below.  Next time I visit Coffee Bay I want to do a surf lesson. Time for me to try something new.
Posted by Firefly the Travel Guy at 1:20 PM No comments:

I finally got to visit Hole in the Wall 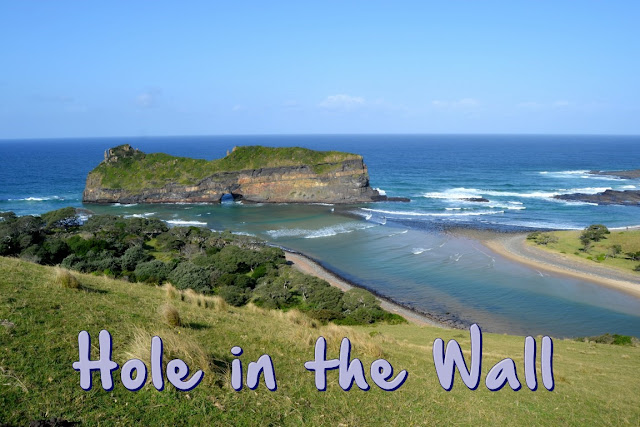 One of my absolute travel highlights during 2017 is the fact that I finally got to visit the Hole in the Wall near Coffee Bay on the Wild Coast.  It was somewhat of an embarrassment to be somebody promoting and marketing the Eastern Cape but having to say that I have never been there. It's not the closest destination to where I live in Port Elizabeth though so it's not like I could just pop up to go and see it.  About two years ago I was in Coffee Bay en route to Durban and wanted to go, but circumstances led to me not being able to.  It means that this time around there was no way I was going to miss it again. Non at all. 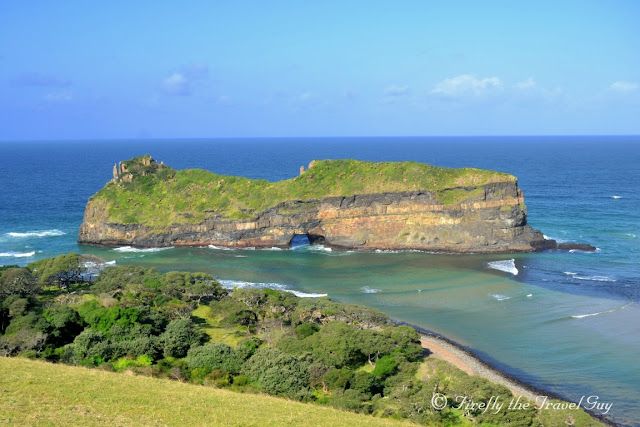 Coffee Bay is a good 6 1/2 hour drive from Port Elizabeth and knowing that I left PE early to give myself enough time to see one of South Africa's iconic geological attractions.  After checking in at the hotel in Coffee Bay and declining the invitation of gin and tonics from a few travel colleagues who had arrived already, I headed the 8 km or so down the coast towards Hole in the Wall.  There are two options to view "the wall".  One from the hill above and the second from the rocky beach.  I opted for the former first and followed the track up the hill.  What a sight! 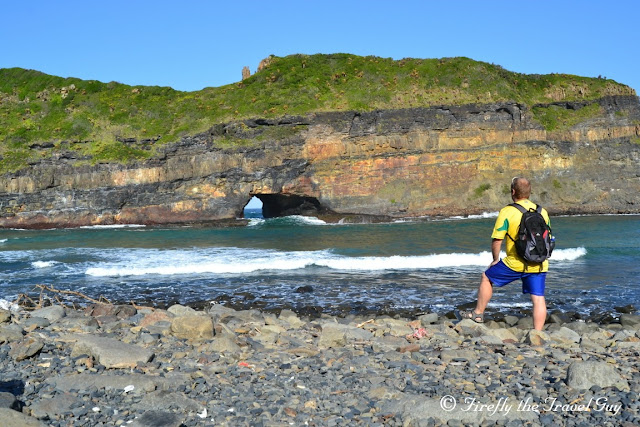 After taking in as much from the viewpoint as I could I headed down to the bottom.  Rather than leaving my car at the normal parking spot and allowing myself to be harassed by the "informal guides", I wangled my way into the grounds of the Hole in the Wall Hotel and after a chat to the GM made my way out the gate and along the path to find myself face to face with this Wild Coast icon.  I literally felt like I could spend all day here and if I had brought a towel and lunch I may well have done just that.  Finally I can tick one of the big things off my South African travel bucket list.
Posted by Firefly the Travel Guy at 12:14 PM No comments:

Spending a day in the Tsitsikamma - video

I have always wanted to make travel videos.  When I started working as a tourist guide in 1998 I had a little video camera which I filmed my tours with.  Back then I didn't know anything about editing.  The video was basically what I shot and I had to make sure the video was rewound just far enough for the next shot to start where I wanted it to.  All those videos are somewhere on VHS tapes in a cupboard at home.  Somewhere I kinda lost the whole video thing and started enjoying photography and blogging.  But as a blogger I started to feel like I'm falling further and further behind many other travel bloggers who started including more video on their social media platforms.

A few weeks ago we headed out to the Tsitsikamma for a day and I decided that it was time to give video a go again.  Rather than go out and take photos all day, I took video clips on my DSLR camera and on returning downloaded a very easy to use video editing program.  This week I finally had a chance to play around with it and once I started I couldn't stop.  I realise that with the DSLR obviously not having an anti-shake like a video camera has I should probably have used a tripod, but I live and learn.  I must say that I was quite impressed with the end result.  Obviously, I still have a lot to learn, but you can definitely be sure that you will be seeing a lot more video from me in future.

So here it is, my first video called A day in the Tsitsikamma.  What do you think?
Posted by Firefly the Travel Guy at 3:55 PM 1 comment: 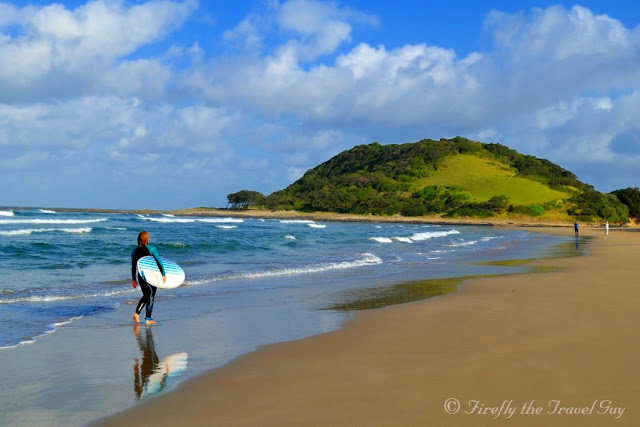 One of the very popular activities to do when young international backpackers visit Coffee Bay is to learn to surf.  Most of the backpacker lodges in the area offer surf lessons and there is always somebody walking around with a surfboard either heading for the waves or out of it.  This young lady just finished her surf and was making her way back to where her friends were waiting for her. Now surfing is something I have never tried and something that is still on my bucket list.  Perhaps next time I visit Coffee Bay...
Posted by Firefly the Travel Guy at 10:18 PM 1 comment:

Koffiebus and Teebus on a moody day in the Karoo 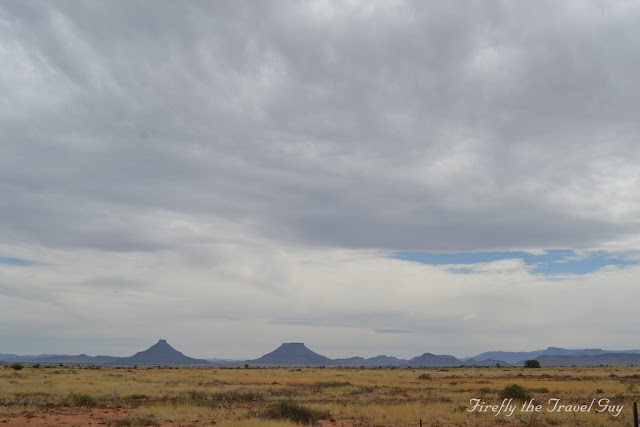 The Karoo Heartland has a unique beauty which I have really learned to appreciate more and more as I have gotten older.  If you're a forest or beach person then the Karoo may not be for you, but if big skies and open spaces feed your soul then there is no better place.  One of my favorite Eastern Cape Karoo Heartland landmarks is the Koffiebus and Teebus mountains outside Steynsburg.  Although there are many similar Karoo koppies throughout the whole region, the fact that there is a thick one (the coffee pot) and a thin one (the teapot) next to each other like this is quite noticeable.
Posted by Firefly the Travel Guy at 12:07 PM No comments: