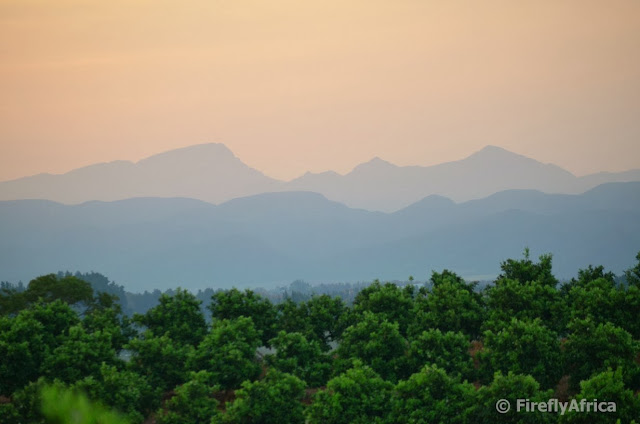 Just after sunset the mountains of the Baviaanskloof west of Patensie turn into silhouettes against the colour changing sky.  Shortly after they turn transparent in the fading light before disappearing into the night.
Posted by Firefly the Travel Guy at 6:13 PM 3 comments:

So this is Christmas

Merry Christmas to all the followers of The Firefly Photo Files and Port Elizabeth Daily Photo.  Wishing you all a blessed and peaceful day. 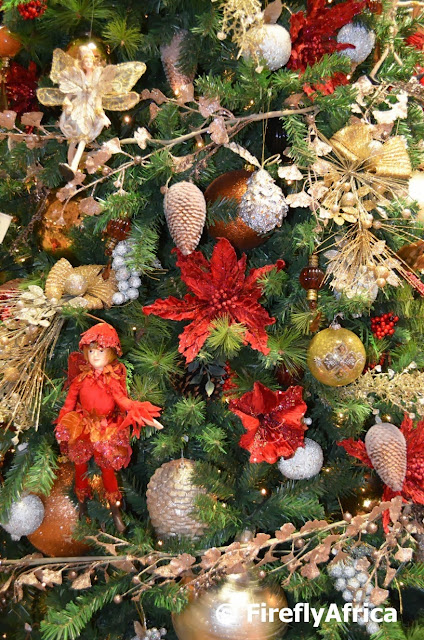 John Lennon – So This Is Christmas
So this is Christmas
And what have you done?
Another year over
And a new one just begun 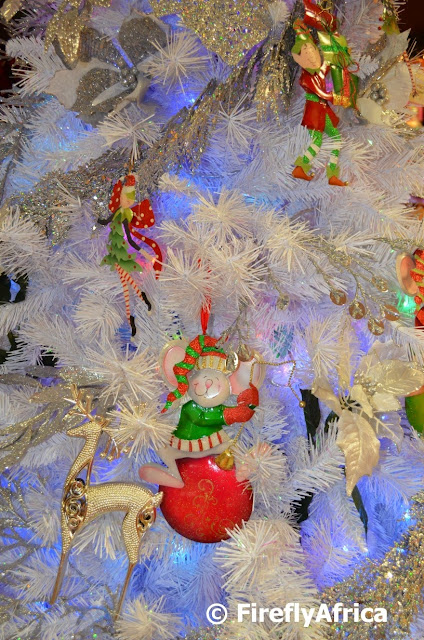 And so this is Christmas
And what have we done?
Another year over
And a new one just begun

Email ThisBlogThis!Share to TwitterShare to FacebookShare to Pinterest
Labels: Celebrations

Santa Clause is coming to town 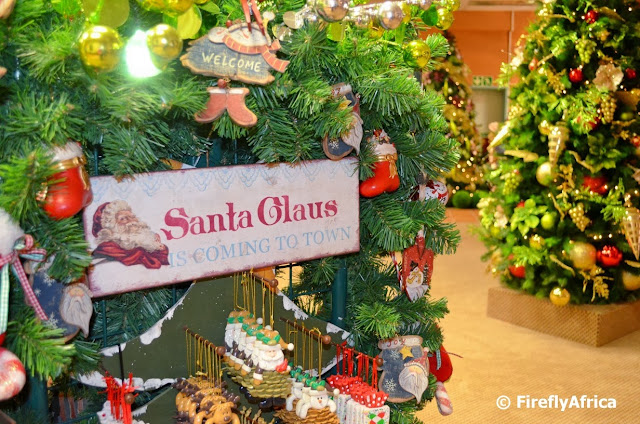 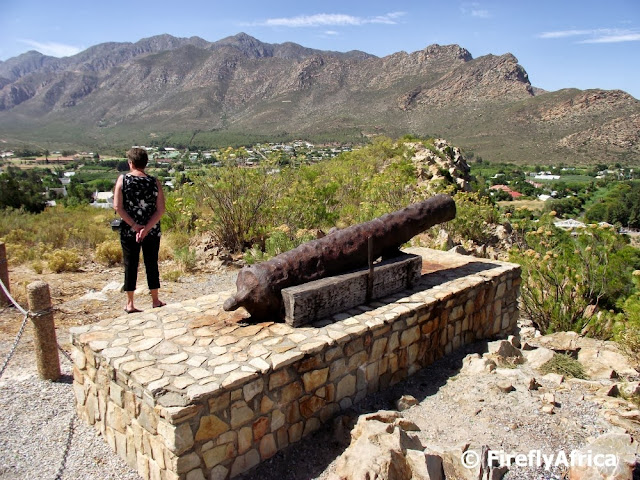 For the last two summers we spent part of our December holidays in Montagu on both occasions and the town has crept deep into my heart.  This year we're not heading that far west and I already miss this beautiful place.  On our last visit I actually said that if I could find something there in my line of work I would really consider moving there.  So as you can gather, this is a "I miss Montague" post, 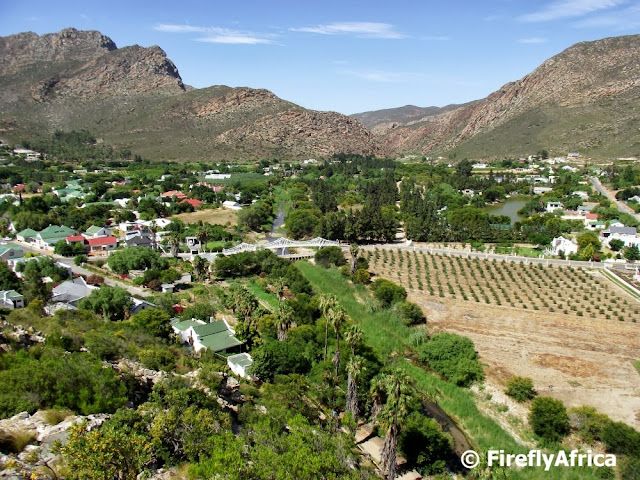 The picture was taken from Kanonkop looking across Montague West.  This is the part of town the river flows through and where the caravan park where we camped is situated.  Thanks to the Leidam and irrigation canals there is a lot more water on this side of town and thus greener gardens and more trees.  I really wouldn't mind a little place somewhere around there to escape to if I could.  Unfortunately it's just a tad too far for a quick visit, but looking forward to the next opportunity to pass through and spend a little time.
Posted by Firefly the Travel Guy at 8:34 PM 1 comment: 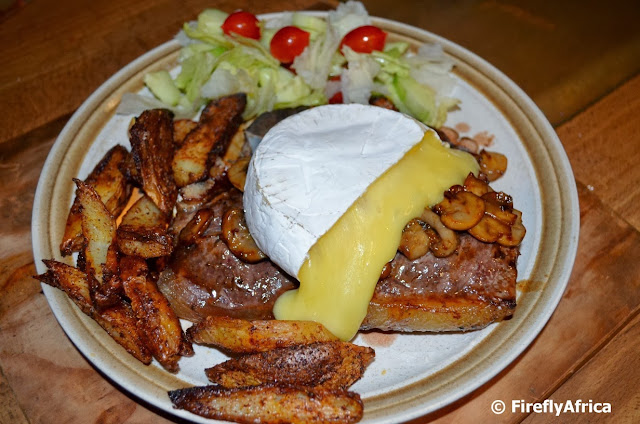 To braai or not to braai? What a stupid question to ask most South African men.  Braai of cause.  South Africans' love for braai has led to a reality outdoor cooking (on coals) show called The Ultimate Braaimaster that airs on SABC 3.  Their motto is, Come rain or shine or wind or snow... we braai.  Enough said really.  Even though I haven't got the cooking skills to enter it myself the show is a source of inspiration for my own braais.  One of these inspirations came from Jacques and Nadia of team Good Better Braai who replaced cheese sauce with a melting Camembert in one of the latter rounds of the competition.  I just had to try it.  Medium t-bone, mushrooms fried in my little black pot over the coals and Camembert cheese wrapped in foil to melt before going onto the steak.  Served with oven fried potato wedges and fresh salad.  My mouth is watering all over again.  Think I should go and light a fire.
Posted by Firefly the Travel Guy at 9:48 PM 1 comment:

Email ThisBlogThis!Share to TwitterShare to FacebookShare to Pinterest
Labels: food

Red sky sunset in the Karoo 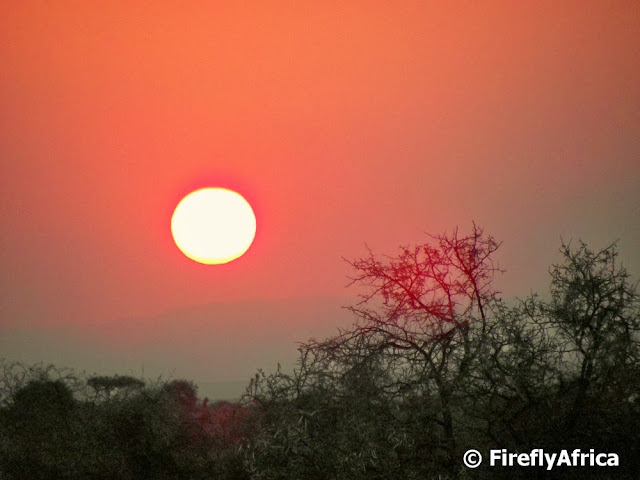 Aaaahhhh, a sunset.  But not just any sunset.  A Karoo sunset.  A proper African sunset.
Posted by Firefly the Travel Guy at 3:29 PM 3 comments:

You can't help but smile when you watch a penguin 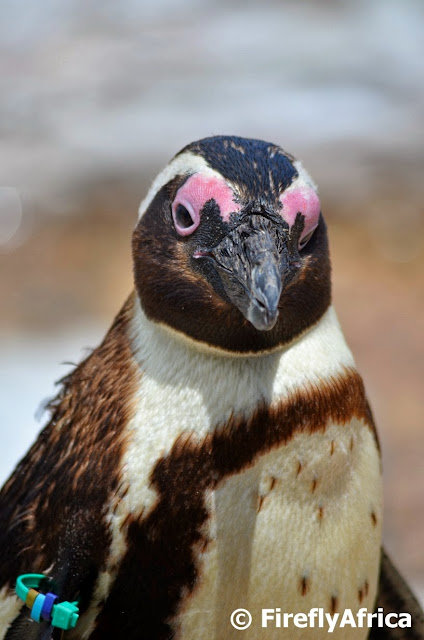 One of the things that Libby Sharwood at the South African Marine Rehabilitation and Education Centre (SAMREC) in Port Elizabeth always say is, "You can help but to smile when you watch a penguin."
The African Penguin is highly endangered with only just over 20 000 breeding pairs left in the world, most of these right on my doorstep on St Croix Island in Algoa Bay.  SAMREC does an amazing job both in the care and rehabilitation of birds that come to them as well as with the education side through schools and visitors (both local and international) that visit the centre.  They do need people to do so much more than smile though.  They need people to act and the easiest way to act is to visit SAMREC as every cent made through the entrance fees collected goes straight back into penguin conservation at the centre.  Even better, adopt a penguin or sponsor one of the solar panels for their Penguins go Green project.
Posted by Firefly the Travel Guy at 8:30 AM 1 comment: 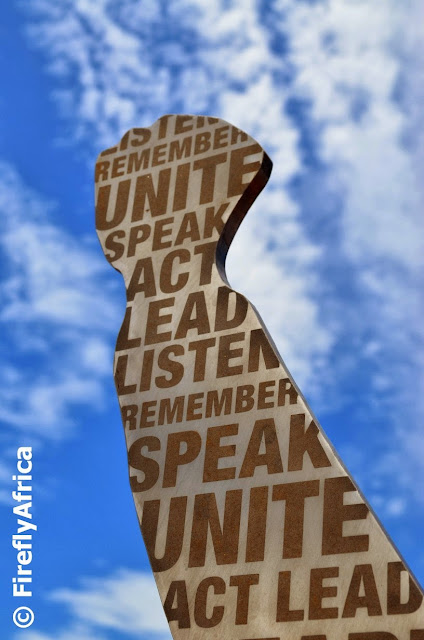 For years now people have wondered what will happen if Nelson Mandela had to die.  Many hoped that they would never have to see the day and that Madiba will live forever.  But he was just a man after all.  Not an ordinary man though.  A very special man.  Many white (sic) people saw him as a terrorist as he fought for the freedom of this country.  I say this country because although the fight against Apartheid was seen by many as the fight of the black people, it was a fight to free all people.  In his defence statement during the Rivonia Trail in 1964 (also repeated during the closing of his speech delivered in Cape Town on the day he was released from prison 27 years later, on 11 February 1990) Mandela said, "I have fought against white domination, and I have fought against black domination. I have cherished the ideal of a democratic and free society in which all persons will live together in harmony with equal opportunities. It is an ideal which I hope to live for, and to see realised. But my Lord, if needs be, it is an ideal for which I am prepared to die."  That said it all, but he continued that ideal and led South Africa peacefully into democracy.  Face it, he could have been bitter about spending 27 years in jail and the whole thing could have turned very ugly if it wasn't for this man.  Clearly he wasn't a terrorist but a freedom fighter.  One who preached peace over violence. That is what made him so special in the eyes of the world.
So here we are this morning, waking up to the news of the passing of this great man.  Life goes on, but with something missing.  I should actually say someone, because the ideals of Madiba should never dissapear.  It is something this country should build on.  I salute you Nelson Rolihlahla Mandela.  Our beloved Madiba.  Born, 18 July 1918. Died, 5 December 2013.  Rest in peace Madiba. I salute you.
The picture is the fist of the Madiba figure on the Donkin Reserve in Port Elizabeth, triumphantly punching in the air.  A salute of honour on this day.
Posted by Firefly the Travel Guy at 11:15 AM 2 comments: 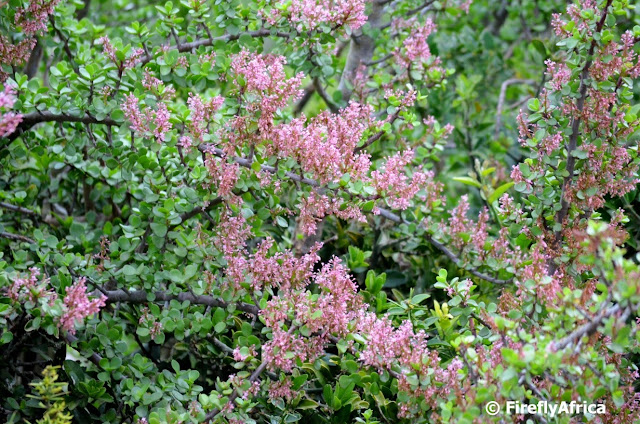 I like pizza... and braaivleis...  and burgers... and... and... and...   Elephants like a whole bunch of things as well.  One of those things is Spekboom (Portulacaria afra).  Spekboom, also called the elephant bush, forms part of the Subtropical Thicket biome and is prevalent in the Addo Elephant National Park.  In actual fact its one of the reasons why Addo has such a good elephant carrying capacity as the Spekboom is a succulent and also supplements their water intake.  Although the Spekboom normally flowers in late Spring the flowers are specifically noticeable after good Spring rains.  Something we had lots of this year.  Right now Addo is stunning with lots of green and yellow, but its the pink Spekboom flowers that stood out for me on my last visit.
Posted by Firefly the Travel Guy at 10:19 AM 1 comment:

A Saturday morning hike on the Flamingo Trail 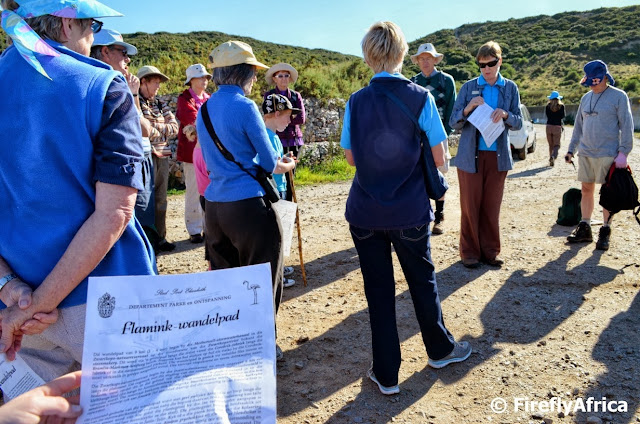 I'm probably the most overweight, unfit active guy there is.  There is no hesitation to go if I get the opportunity to get out and about and because of my love for the outdoors I make an effort to explore and do as much as possible.  I've been fortunate that I've had the opportunity to do most of the day walks around Port Elizabeth with the exception of only a few.  One of those being the Flamingo Trail in the Swartkops Nature Reserve and I didn't think twice about joining the Zwartkops Conservancy on a guided walk of the trail. 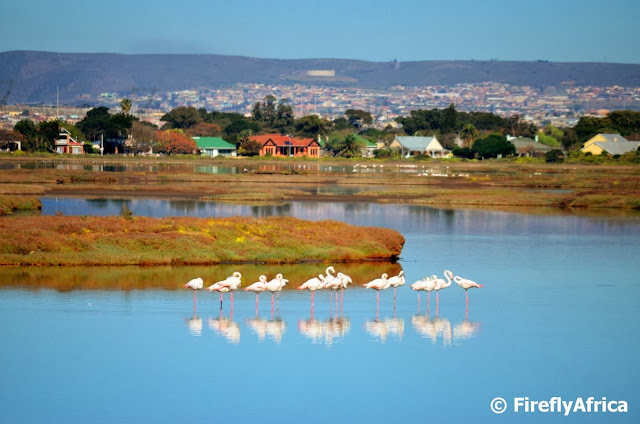 The Flamingo Trail is 6 - 8 km long and best done as a guided trail with the guys from the conservancy.  The walk starts at the Motherwell storm water canal and follows the estuary in a westerly direction.  The Swartkops estuary is an important breeding ground for numerous waders and sea birds and is also home to up to a thousand flamingos, hence the name of the trail in case you wondered.  The surrounding reserve is there to protect the estuary as well as the Valley Thicket (or Valley Bushveld) on the northern slope and escarpment of the reserve. 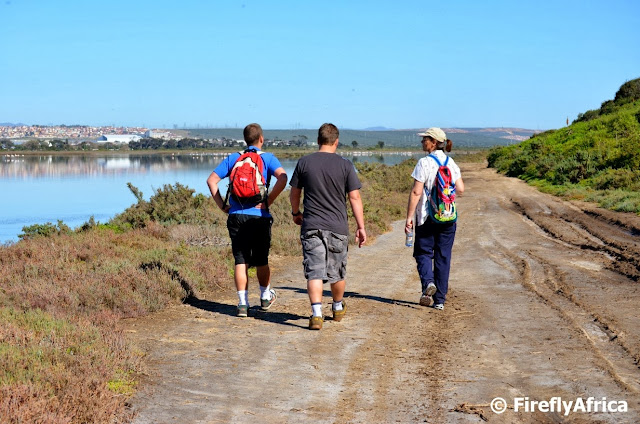 Those joining the walk split into two groups.  One group did the longer trail which rounded the estuary and follow the banks past Redhouse.  I had more active things to do later in the day plus Chaos Boy was tagging along for the walk so opted to do the shorter one which took us along the northern bank and then up onto the escarpment.  I was in good company though with fellow Geocachers Seekoei and erenei as well as Cathy Dempsey from Dempsey's Guesthouse deciding to also do the shorter one. 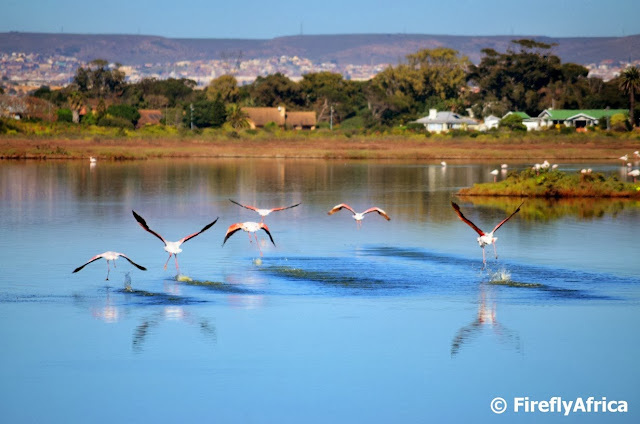 Jenny Rump from the Zwartkops Conservancy kept pointing out interesting sights and told us about the threats that impacts on the Swartkops River and estuary.  The Zwartkops Conservancy is campaigning to have the estuary declared a Ramsar international wetland which will make it the first such wetland in South Africa situated within an urban area, and the first initiated by the public as opposed to government. The national Dept of Environmental Affairs is giving the application its full support though. 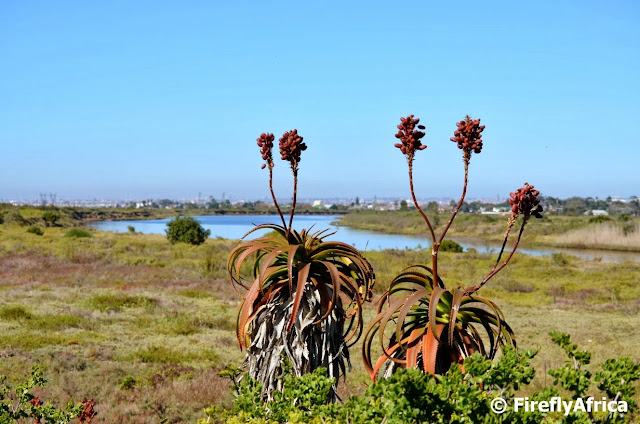 Walking along the river bank gave us some beautiful views of the river and fairly close up sightings of birds with my interest on that day being specifically flamingos.  You usually get to see the flamingos while driving along the Swartkops road towards Despatch and Uitenhage but it was great to get to see them while on foot.  It did help that we had a gorgeous windless Saturday morning and I was kinda glad I had my hat and some extra water on hand as shade is a bit on the spares side along the river banks. 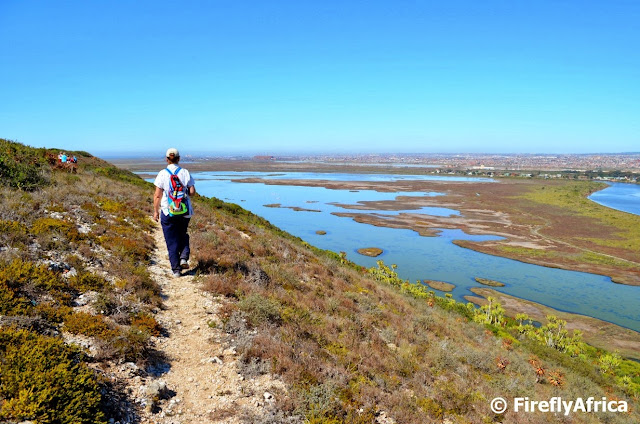 After a short rest at the turning point, Jenny took us up onto the escarpment and although we were huffing and puffing when we got there it was truly worth it.  The view from up there across the estuary towards the city is magnificent.  The walk onto the escarpment and back down took us through the Valley Thicket where succulents like Aloes and Tree Euphorbias as well as Boer Beans and other smaller trees can be found.  Have I mentioned the stunning view?

Anybody wanting more information about the Zwartkops Conservancy or interested in finding out when the next guided walk is can contact Jenny Rump at Tel – 082 853 0700 or 041 466 1815 or
email: zwartkopsconservancy@iafrica.com.
Posted by Firefly the Travel Guy at 3:53 PM 2 comments:

Taking a gardening break before the wind comes 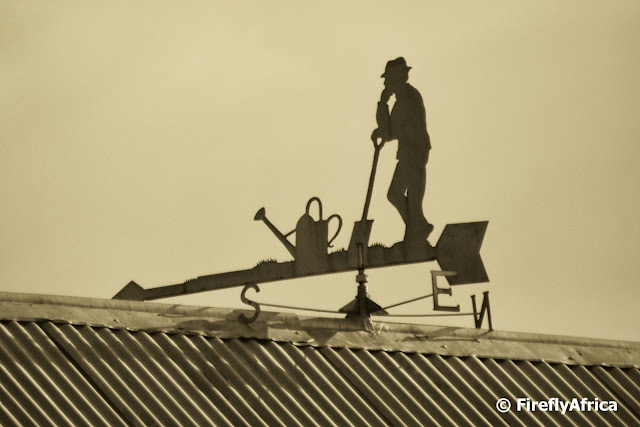 It's been a beautiful day in the Bay today and with some bad weather coming I made the most of it.  Spent the morning Geocaching with the Kids and did a quick bit of gardening in the afternoon, although I did feel like this wind vane at times.  I snapped the pic at Ann's Villa recently.
Posted by Firefly the Travel Guy at 6:46 PM 2 comments: