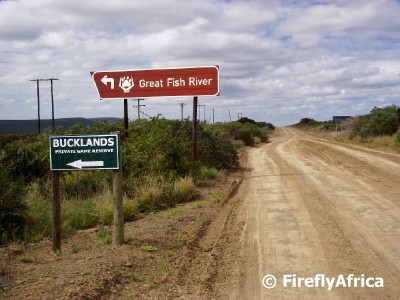 The area from Port Elizabeth eastwards is big game country and one of the new (game reserve) kids on the block is Bucklands Private Game Reserve.  After visiting them recently on the Mini vs Maxi trip I have to honestly say that calling them a kid doesn't do them justice though.  Bucklands are situated about 35 kilometers north of Grahamstown next to the 45000 hectares The Great Fish River Nature Reserve. 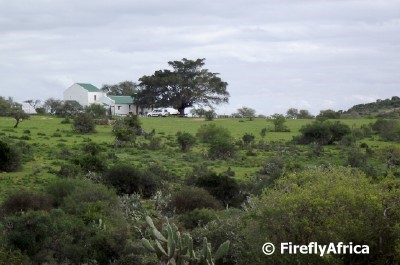 Bucklands was launched in 2007 by Terry and Michele Stewart and their family with the Luxury Tented Camp opening in 2009 and the Boutique Guest House in 2010.  The reserve consists of 5500 hectares and includes the properties known as Bucklands, Lower Bucklands and Schrikwaters Poort.  It was decided not to introduce lion and elephants at this stage, but the reserve does have white rhino and buffalo along with giraffe, zebra and a wide variety of antelope and smaller animals.  On our evening game drive we even saw Aardwolf which I have only seen once before, but more on that in a later post. 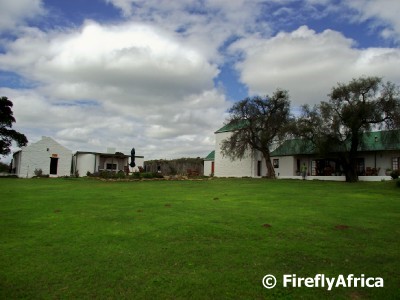 On our visit we stayed in the newly restored Bucklands Boutique Guest House.  The accommodation is situated in the original homestead which was erected in about 1872 by Alf Buckley.  Attached to the house is double storey fort which is thought to predate the farm house itself.  As there are now exact records on the fort, the assumption is made that it was built as part of a military outpost on the frontier defence line, serving as protection between Fort Brown and Double Drift. 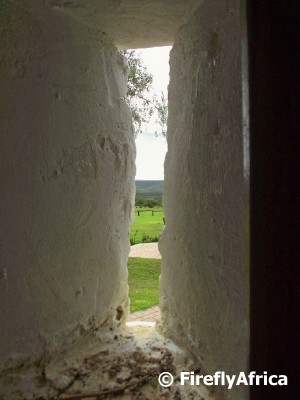 The first floor of the fort is taken up by one of the four bedrooms at the lodge while the ground floor is used as a sitting room away from the formal lounge.  Some of the interesting features of the fort section of the lodge are the thick fortified walls with the original gun slits in them. 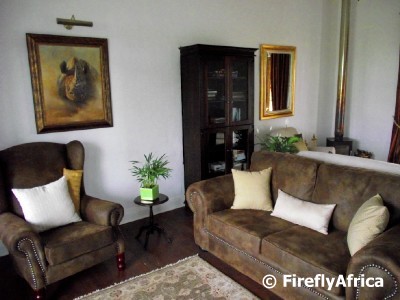 The lodge itself is stylishly furnished and decorated using very dark wood and leather.  The one thing that really impressed me was that it wasn't over done as you often find at lodges, so it didn't look "plastic" Africa.  It had a colonial, yet modern kinda simplistic feel.  Homely in many ways.  You weren't afraid to sit down and get comfortable without somebody looking at you with a raised eyebrow. 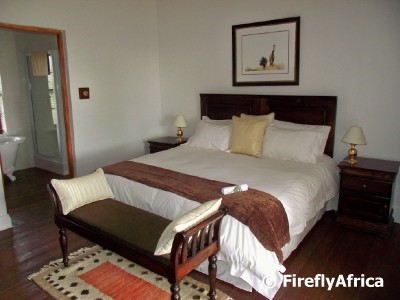 The four luxury en-suite bedrooms are all individually furnished with the honeymoon suite having a four poster bed.  I'm not sure about the other rooms, but mine had a clawed bath in it which the Damselfly would have loved had she been there.  Returning from dinner, which included homemade venison pie, I even had a warm water bottle in my bed.  And that is exactly where I spent the rest of the evening relaxing, listening to the jackals calling in the distance.

More posts about Bucklands coming over the next couple of days...
Posted by Firefly the Travel Guy at 12:30 PM