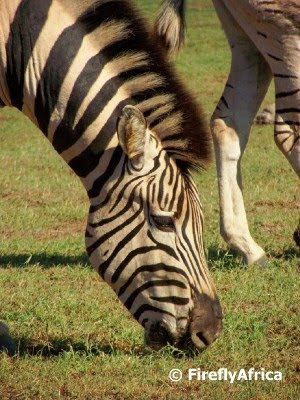 On our visit to Addo Elephant National Park the other day we found a couple of Burchell's Zebra browsing on an open field just past the Marion Brie waterhole. The Burchell's Zebra is the most common zebra in South Africa and are normally found in short grassland areas within savanna woodlands and grassland plains. The body stripes (each individual have a unique set of stripes, very much like fingerprints) of the Burchell's Zebra is less numerous and broader than that of the Cape Mountain Zebra with less prominent stripes on their legs. The Burchell's Zebra also has a distinctive brown phantom stripe on their white stripes. 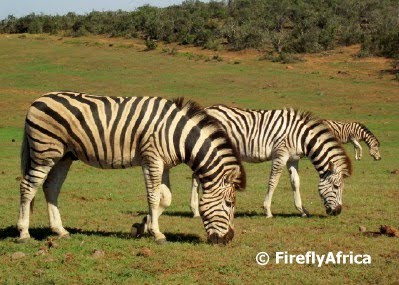 A foal is born after a gestation period of 360 - 390 days. When it is born the mother will first take it away from the rest of the herd so that the foal can get used to her unique stripes and sent and will be able to identify her. Only then will she go and introduce it to the rest of the herd. The stripes are used for camouflage either in the bush or when the group is in its heard. With all the stripes moving around a lion wouldn't be able to focus on one individual and they have a better chance of escaping.
Posted by Firefly the Travel Guy at 2:00 PM