There is an Afrikaans song that says "Oudtshoorn is 'n groot voël paradys..." (translates to Oudtshoorn is a big bird paradise). And that is so true. Oudtshoorn is called the ostrich capital of the world as 95% of the world's captive ostriches are found around the town. In the early days ostriches were farmed purely for their feathers, but today every single piece of the bird gets used. They are farmed primarily for their skin which produces the world's second strongest leather after crocodile. Feathers get harvested off the birds and a total of 23 tons are shipped to Brazil every year for the Rio carnival while ostrich meat (red meat I'll let you know) is now in demand the world over due to their low level of cholesterol. Ostrich fillet steak made to perfection cannot be beaten. Tourism plays a major role in the tourism industry with at least three ostrich show farms in operation around the town. Highgate Ostrich Farm alone had more than 100 000 visitors last year through their gates. 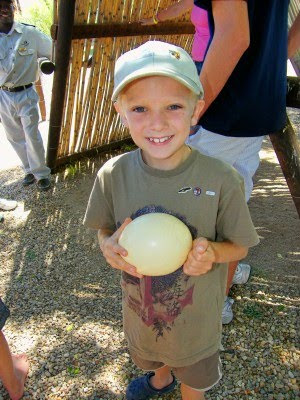 Chaos Boy holding an ostrich egg
A visit to an ostrich show farm normally starts with an explanation of ostriches, where they come from and what is done with them. You get shown all their different feathers and what is used for. From there visitors get taken to the ostrich pens. Here you can hold a egg and even stand on it (it can hold 120kg) if you want to. An ostrich egg is the equivalent of 24 chicken eggs and can take about 1.5 hours to hard boil. Also, the egg, unlike the meat, is very high in cholesterol. 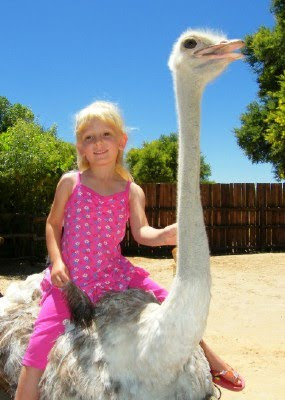 Drama Princess sitting on top of a "blond" ostrich
Visitors can also sit on an ostrich while its kept stationary on a feather plucking frame ... 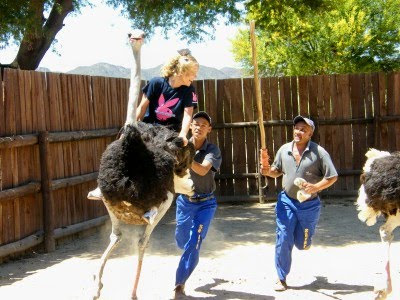 ... while the brave (as long as they weigh less than 75kg) can ride under the watchful eye of the professional ostrich jockeys. 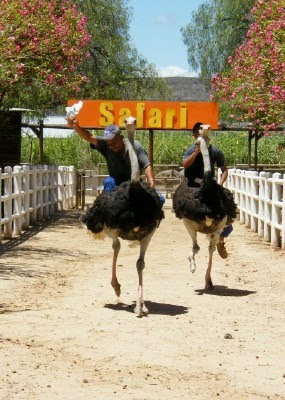