There are two ways to get from the Karoo into the Klein Karoo over / through the Swartberg and both are very scenic. The Swartberg Pass is for those with lots of time and Meiringspoort for those in a hurry. 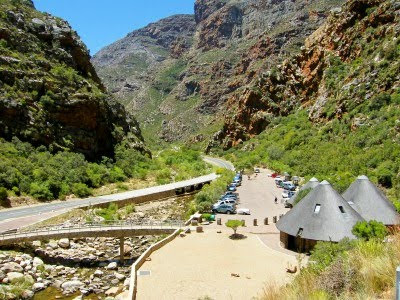 The Meiringspoort road features soaring cliff walls with spectacular rock formations along the 25 km tarred road which winds along the floor of the gorge and crosses the Groot River 25 times. Each crossing, or drift, has its own name and story. Its not easy being the driver with such magnificent scenery around as one tends to look up and about when traveling this way. The first road through the poort was constructed between 1856 and 1858. In the early days the road was amongst others used to transport wool from the interior to the coast with 12 long ox-drawn wool wagons. Today is used mainly by people (and goods) traveling to the Southern Cape coastal area. 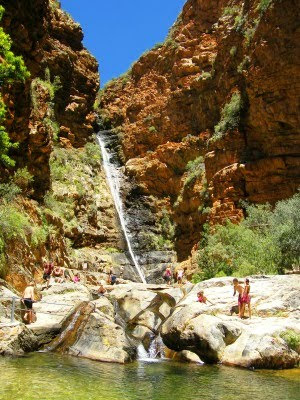 There are a couple of places where one can stop. The most popular one is the Waterfall information site. Here visitors will find one of the most scenic spots in the kloof. The Skelm has a waterfall tumbling into a dark pool which, legend has it, is bottomless. (In 1938 it stopped flowing for the first time in human memory). On the day we drove through the poort the temperature was in the upper 30's Celcius and a lot of the people who stopped were cooling down in the pool and streams running from it. 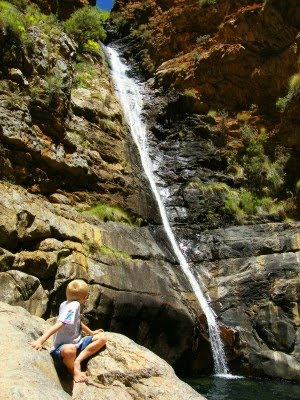 Legend has it that a beautiful mermaid lives in the pool at the foot of the waterfall. During the 1996 floods a story circulated that she had been washed out of the pool, down the Groot and Oliphants rivers and out to sea where she was caught in a fisherman's net and taken to the CP Nel Museum in Oudtshoorn. Follow this link for more info on Mermaids in the Karoo.

Posted by Firefly the Travel Guy at 4:00 PM