Before I get to today's part of the tour, I just want to answer a couple of questions that Ann had. Ann asked why the entrance through the Knysna Heads are so dangerous and if there were any plans for a breeding program for the elephants. There are several factors that make the Heads so dangerous. The entrance is about 200m wide although only about 70m are accessible to boats. There are two sandbars just outside the heads that make for the sudden development of waves, there is a submerged rock to the one side, the current through the Heads both in or out is in the region of about 11 knots which means having an engine failure could be catastrophic and lastly wind gets trapped between the Heads which is dangerous for sailing ships. That is it in a nutshell. As far as breeding of elephants go. Research show that the elephants are the same subspecies as the other elephants found in South Africa. The difference is that the have adapted to living in the forest. A couple of years ago they tried to introduce a couple of young orphaned elephants into the forest. They just cut a beeline to the nearest fields and destroyed fences in the process. Unfortunately they had to be removed.

The next stop on the tour is Wilderness. Wilderness is a lovely quite little town which has not developed as much as the other towns on the Garden Route. There is a story behind the name of a young man living in one of the town in the area long ago. He asked a girl to marry him and she said yes, but on the condition that they live out in the wilderness. Little did she know that he had a farm which he called Wilderness to accommodate this request. 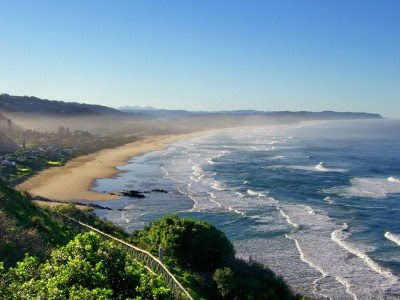 This view is looking eastwards from Dolphin Point. Wilderness beach is a long stretch of sand which is very popular during the holiday season. The haziness is sea mist which hangs over the area just about permanently as it is trapped by the surrounding hillsides. 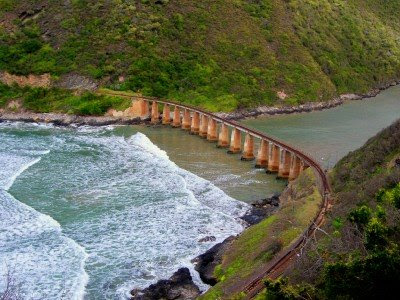 Looking west from the point you see the Kaaimans River with the Kaaimans Bridge across it. This is part of the route that the Outeniqua Choo Tjoe steam train used to take. A couple of years ago the track was very badly damaged in heavy floods and have not been repaired. The train now runs the other way towards Mossel Bay. Tomorrow I will post about George and the next day the train and Mossel Bay will have its turn. Photos of the Choo Tjoe crossing the bridge can be found in just about any guide and photo book out there.
Posted by Firefly the Travel Guy at 12:23 PM