Everybody (well I hope everybody) knows that South Africa will be hosting the FIFA Soccer World Cup in 2010. In the 4 years preceding the World Cup, the host country hosts SoccerEx. It is an exhibition covering every aspect of soccer. SoccerEx is being hosted in Sandton, Johannesburg from Monday 24 November 2008 - Wednesday 26 November. The organisation I work for is an sharing exhibitor at this year's SoccerEx and our CEO was supposed to go. Late on Friday afternoon he found out that there will be something requiring his attention early in the week and the responsibility of representing our organisation fell on my shoulders. 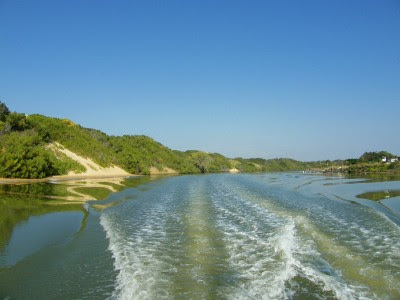 IN THE WAKE (excuse the pun) of this I won't be able to do posts for the next two or three days, but I will definitively be back on Thursday. The wake above was taken behind the Sundays River Ferry while on the way to the Colchester dunes.
Posted by Firefly the Travel Guy at 3:27 PM