Port Elizabeth's Main Library stands next to the Market Square across the road from the City Hall. The original building on the site used to be a courthouse of which one room was used as a library. The present building was opened in 1902 and was given over exclusively as a library. The architecture is regarded as an excellent example of Victorian Gothic while the terracotta facade was manufactured in England and actually sent out by ship in numbered pieces to be reassembled on the site. The library has an excellent Africana collection that included a lot of 1820 Settler material. The other notable feature of the building is its stained glass windows. 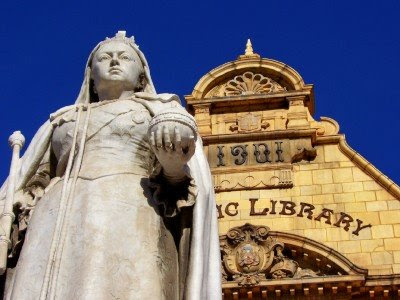 Immediately in front of the library is the commanding figure of Queen Victoria. The statue is made of Sicilian marble and was unveiled in 1903 as celebration of her Diamond Jubilee which took place in 1897. It wasn't a case of the inhabitants of the Cape Colony being late in celebration, it just took them 6 years to raise the funds to erect the statue.
Posted by Firefly the Travel Guy at 3:39 PM