During my series on The British Settlers is posted about the history of Bathurst here and here. The biggest attraction in Bathurst is not an historic one, but a bit of a gimmick. Bathurst is in the heart of one of the biggest pineapple growing areas in South Africa. The Bathurst Pineapple Growers Association is base on Summerhill Farm on the outskirts of town. Some years ago the farmers from the Association visited Australia on a fact finding mission and saw what was then the biggest pineapple in the world. The Aussies being out arch rivals in sport, they decided that they wanted to beat them and put one up that was bigger. 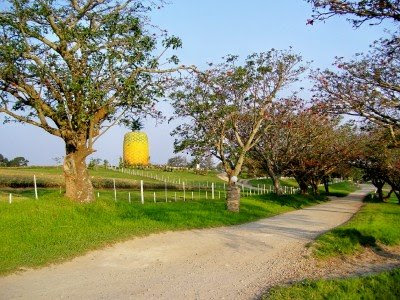 Thus the world's biggest pineapple now stands in Bathurst, in the Eastern Cape province of South Africa. It stands 16.7m high and has 3 floors. It is constructed out of a fibreglass outer skin covering a steel and concrete superstructure. The ground floor has a gift shop full of pineapple goodies such as jams and chutneys, locally made pottery and puzzles as well as t-shirts to name but a few of the items for sale. 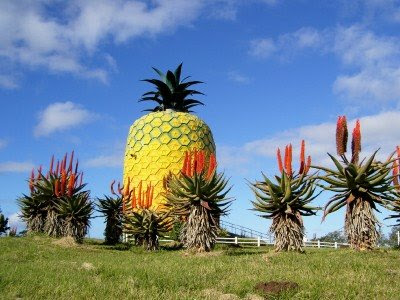 The 1st floor has tourist information and static displays of the Pineapple Story. It is a must visit for kids doing school projects. The 2nd floor has a continuous DVD on the Eastern Cape pineapple industry and leads up to the observation deck with magnificent 360°views over the surrounding rolling farm lands to the Indian Ocean.
Posted by Firefly the Travel Guy at 9:12 PM