Seeing that we started touring down the Garden Route I decided to just continue and show you why it is such a popular tourist route. I may interrupt the tour every now and then to do other posts, but we will keep on making our way westwards.

The next stop after the Tsitsikamma National Park and the Bloukrantz Bridge is Birds of Eden, situated just outside the town of Plettenberg Bay. Birds of Eden is the World's Biggest Free Flight Bird Aviary. The park has about two hectares that has been enclosed. The catch is that when you are inside the aviary it doesn't feel like you are in an enclosure. 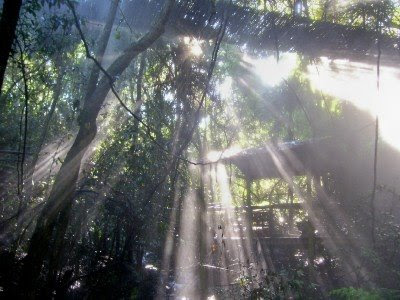 The enclosure is divided into two sections. The first section is a forest environment with a stream and waterfalls while the second section is an open area surrounding a dam. As you walk through the forest there is one section where a rain forest is being created. The sun shining through the rain made for some excellent photos. 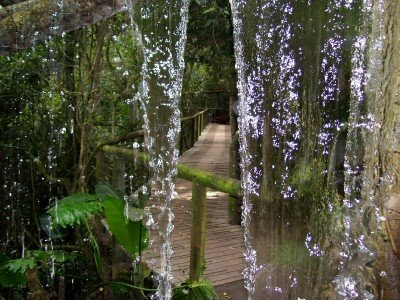 In one spot the walkway goes behind a waterfall and the split in the water with the walkway in the background made for another great photo opportunity. 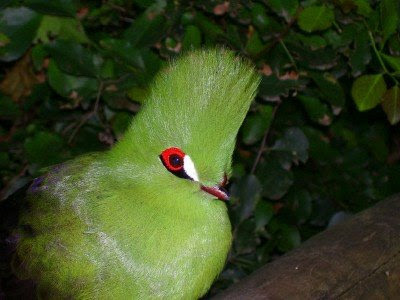 But the best thing about the park is obviously the birds. Although you aren't allowed to touch them, they can come to you and because of the fact that they are used to people you can get very close. This makes for super (I didn't want to use the word excellent again and I tend to use awesome way too much) photo opportunities. This green bird is a Turaco or locally known as a Loerie. They are very elusive birds that live in the indigenous forests. You often hear them (they actually sound like baboons in the distance), but rarely see them because of their green plumage. They hop from branch to branch and when they glide to the next tree they reveal their bright red feathers under their wings.
Posted by Firefly the Travel Guy at 9:55 PM