Golf - or at least trying

I mentioned the other day that I went to play a round of golf with my brother the other day and found some excellent specimens of bracket fungus. Somebody (I think it was Marcelle, but now I can't find where the comment was made) asked if I go to play golf with my camera around my neck. The answer is now. I carry it on my back in my backpack. *wink* I never leave my camera at home. You never know when a photo opportunity will present itself. 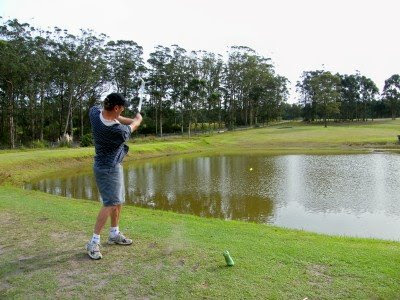 As most of you will know, I like to see myself as more of a travel and nature photographer than a people photographer and because I don't have a top of the range camera, I have never really taken a lot of sports photos. So I tried my hand at a bit of golf photography. Here my Boet is teeing off on the 7th tee of the Kragga Kamma Golf course in Port Elizabeth. This pic was taken shortly before his ball (the yellow one you can see crossing the water hazard) went "ploep" halfway across. The second ball he lost to water that morning. 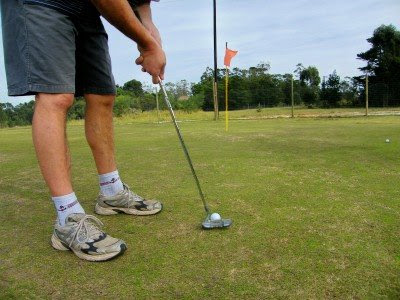 I think the guys playing behind use must have though me mad crawling around the greens with my camera in hand trying to get the above and below photos. By the way, you can see my ball on the right hand side of the picture. I actually had a better lie than my Boet. (Although I think it took me 4 shots to get there and him only two - lol) 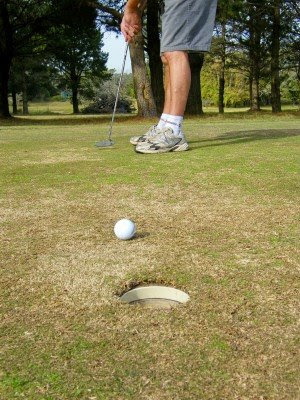 I tried this picture twice which meant that he had to putt twice. Both times he got it in the hole. Probably his two best putts of the day, but who's counting. Oh yes, ME! By the way, I think I played a 74 shot game. Unfortunately for me it was a 9 hole golf course which shows that I still suck at the game. But who's counting ...
Posted by Firefly the Travel Guy at 3:14 PM

Email ThisBlogThis!Share to TwitterShare to FacebookShare to Pinterest
Labels: sport