Just prior to the arrival of the British Settlers in Algoa Bay in 1820, Sir Rufane Donkin took up an acting position in the Cape Colony as Governor. He travelled to Algoa Bay to welcome the Settlers. Sir Rufane lost his wife, Lady Elizabeth Donkin, to the fever in India two years previously and was still mourning her loss when he took up his position at the Cape. 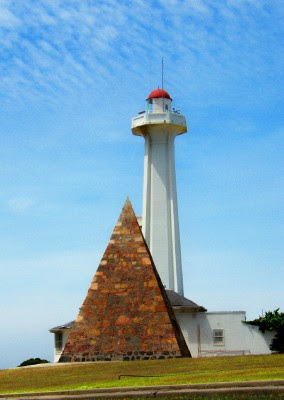 When he arrived in Algoa Bay he found a small settlement without a name but with a lot of potential to become an important town on the coast. He decided to name the town after his wife and called it Port Elizabeth. He also went up onto the hill overlooking the landing beach and proclaimed an open space. This open space is known as the Donkin Reserve. The Pyramid on the Reserve he commissioned as a memorial to his wife. Know as the Donkin Memorial, it has two plaques on it. One reads "To the memory of one of the most perfect of human beings who has given her name to the town below" 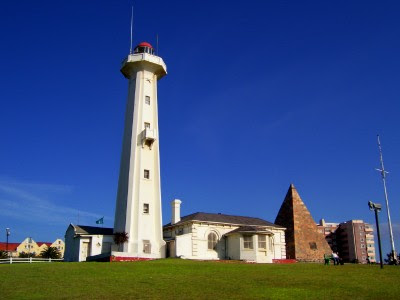 The lighthouse on the Donkin Reserve was built in 1862. The hight of the lighthouse had to be increased in 1932 due to the development of the town behind it and the interference on the lights visibility. Eventually the light was taken out of commission in 1973 and moved to the other side of town.
Check out a night view of the Donkin Reserve here.
Posted by Firefly the Travel Guy at 8:31 PM