Very few people would have heard of the little dusty Karoo village of Nieu-Bethesda if it wasn't for The Owl House. Nieu-Bethesda is situated about 3 1/2 hours north of Port Elizabeth close to the town of Graaff Reinet.
The house belonged to a woman named Helen Martins. Martins became bored with her "dull" life and resolved to transform the environment around her. She began an obsessive project around 1945 to decorate her home and garden and used cement, glass and wire to decorate the interior of her home and later build sculptures in her garden. Almost all the walls of the interior of the house were covered in decorative and colourful crushed glass. 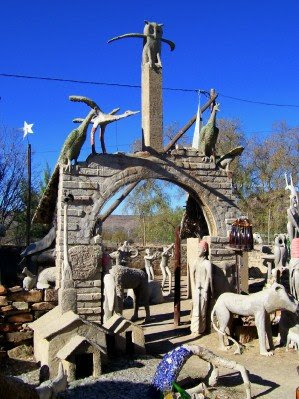 In 1964, she was joined in her work by a Coloured man named Koos Malgas, who helped her build the sculptures in her garden.Martins drew on inspiration from Christian biblical texts, the poetry of Omar Khayyam and various works by William Blake. 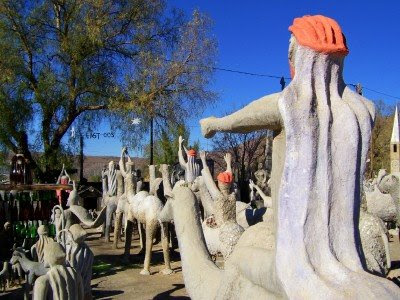 The sculptures were predominantly owls, camels and people, mostly pointing toward the east as a tribute to Martins' fascination with The Orient. Her work was a source of suspicion and derision within the village and during her time, Helen Martins received very little support or enthusiasm about her work.
Her lifelong exposure to the fine crushed glass she used to decorate her walls and ceilings caused her eyesight to start failing in 1976. She committed suicide in 1976 by ingesting caustic soda, aged 78. 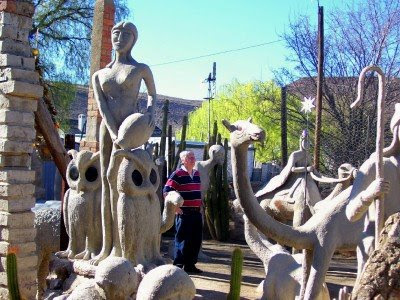 The Owl House has since been kept intact as a museum per Helen Martins' wishes and is now managed by the Owl House Foundation (founded 1996). Athol Fugard published a play in 1985 about the house called The Road to Mecca which was later made into a film of the same name. I've only had the pleasure to visit here once, but would go back again if I get the opportunity. As you can see in the last picture, it truly is a spot where you can just stand quietly and contemplate.
Most of the above information I got off Wikipedia.
Posted by Firefly the Travel Guy at 7:53 PM