The Aloe is a succulent plant that is native to Africa and very common in the Western Cape and Eastern Cape provinces. There are about 400 different species of Aloe plants. 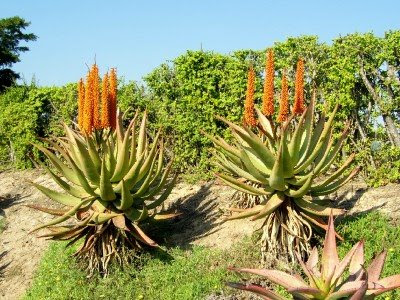 The Aloe Ferox is found specifically in South Africa and is one of only a few that were used traditionally as a herbal medicine. Although the Aloe Vera is the best known Aloe as far as medicinal value goes, the Aloe Ferox also has various uses. Today, the gel found in the leaves is used for soothing minor burns, wounds and various skin conditions. It is also used in skin creams, shampoos and, although not proven successfully, in some herbal drinks. 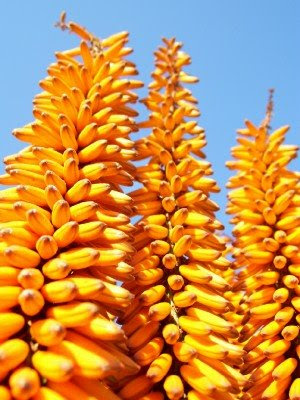 Most Aloes have a rosette of large, thick, fleshy leaves. The leaves are often lance-shaped with a sharp end and a spiny edges. Aloe flowers are tubular, frequently orange, yellow, pink or red and are densely clustered.

When the Aloes are in flowers it does not just mean a visual spectacle, it also means an abundance of food for bees and sun birds. It also provides great photo opportunities to catch these little workers in action on the flowers.
Posted by Firefly the Travel Guy at 10:31 PM