One of Daleen Matthee's books, The Mulberry Forest, tells the story of a group of Italian silk farmers who where brought to Knysna to farm with silk worms and start up a silk spinning industry.  They were settled at Gouna in a forest clearing occupied by a headstrong Silas Miggel and his daughter.  When it was clear that the Italians weren't coping, they the father and daughter came to their rescue.  The daughter because she cared and Silas because he wanted them off his land and on board a ship heading for Italy ... 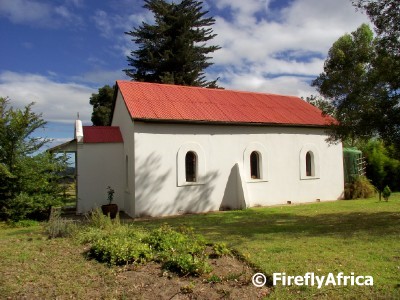 The book was based on the true story of 30 Italians that were brought to Knysna in 1881 to farm with silk.  Unfortunately the dream never materialised due to a failure to produce Mulberry trees to feed the silk worms required to spin the silk.  When they were brought to Knysna it was with the understanding that there were mulberry trees in the forest, but it turned out what was referred to as a wild mulberry by the forest people wasn't related to the real mulberry at all. 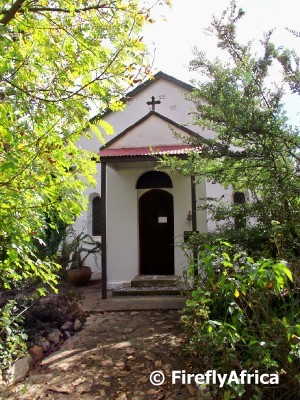 The Italians were forced to live out a meagre existence by means of agriculture and small scale cattle farming at Gouna.  The San Ambrosa Church in Gouna was built for them by Rev Rooney ten years after their arrival in 1891.  The church was built to remind them of their lives back in the foothills in Italy and give them a closer connection to home. 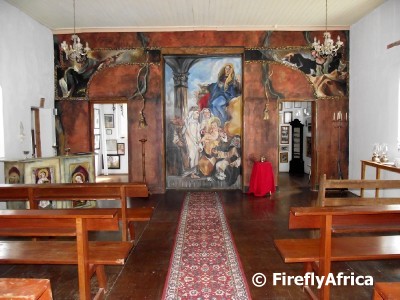 Unfortunately over the years the church has been vandalized and looted of its original valuables.  Some restoration has taken place and a fund has been started to restore the rest of the church.  Visitors to the church on a farm in the middle of the Knysna forest is asked to make a donation towards the fund. 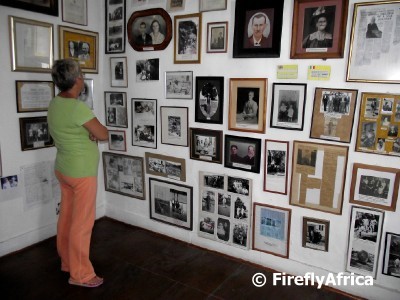 The descendants of these Italian pioneers still live not just in Knysna, but all over South Africa.  In the back of the church there are two rooms that act as a museum with a lot of information, old photos and implements.  There is also information on the more recent achievements of their descendants in both the sporting and business fields.  It was amazing looking through the museum and seeing the real photos of the people I read about in the book.  Suddenly I'm in the mood to read the book again... for the third time.
Posted by Firefly the Travel Guy at 12:15 PM