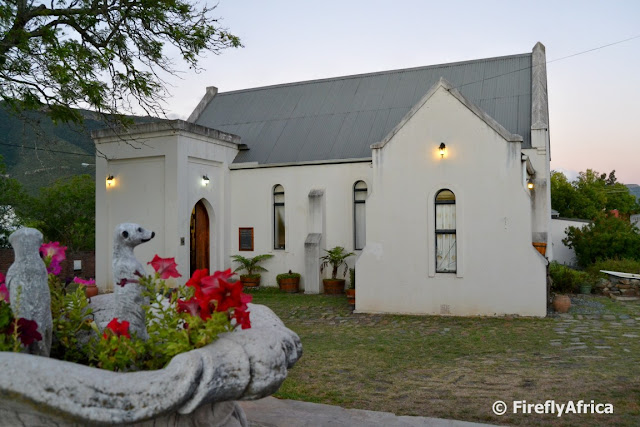 I'm not much of a drinker preferring to do the sacrilegious thing of making beer shandy by throwing lemonade into a perfectly good beer.  But I am known to enjoy a good beer or wine tasting so it shouldn't come as a huge surprise that I'm doing a post on a place where you can do a spot of whiskey tasting.  As long as I only need to taste.  But this isn't sommer any place, it's a whiskey bar inside a church and can be found at Angler and Antelope Guesthouse in the Karoo Heartland town of Somerset East.
The church building is the town's original Roman Catholic church building and was built in 1906.  Named after St Francis of Assisi, the patron saint of animals, the church was built with funds raised by local Catholics and aided by contributions from the Catholic Diocese of Port Elizabeth.  The presbytery next to the church was built for the first priest of the congregation in 1925 and is used as the guesthouse's family cottage today.  The last Roman Catholic priest to serve in St Francis was Father Michael Scully.  He used to ride around town on his bicycle and was always willing to help others, especially if you happened to have a spot of Irish Whiskey in the house.  I'm sure if Father Scully was still around he would give the pub with its collection of over sixty malt whiskeys his blessing.  The pub isn't open to the public so if you want to try it out you will have to book into Angler and Antelope or at least make a special arrangement with owner Alan Hobson.
Just for interest sake, Father Scully grew his congregation in Somerset East during his time here to such an extent, that they outgrew the little church of St Francis.  A second church was built in Paulet Street, but this soon became too small as well.  The new Roman Catholic Church in Beaufort Street was built, but sadly Father Scully died in February 1997 at the ripe old age of 80, and did not see its completion.
Thanks to Angler and Antelope for the historic information added to this post.
Posted by Firefly the Travel Guy at 1:09 PM