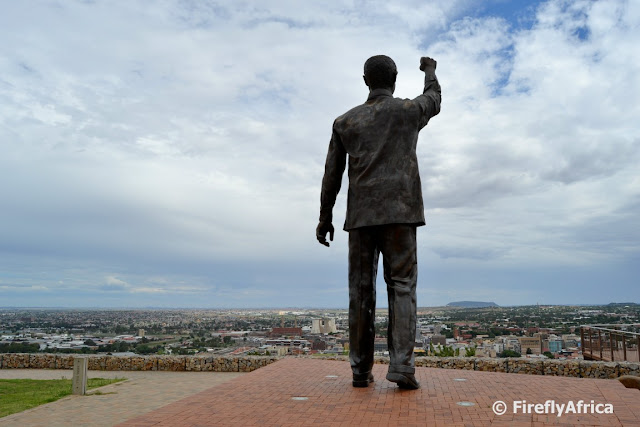 Naval Hill in Bloemfontein has always been a beacon in the Free State capitol and known for the magnificent views of the surrounding city.  In 2012 an eight meter tall bronze sculpture, made by the same sculptor as the one standing in Mandela Square in Sandton, was revealed.  Last year during the #MeetSouthAfrica bloggers trip before Indaba, the one group spent a night in Bloem and visited Naval Hill at sunset.  The pictures they posted were stunning.  I also got to spend a night in Bloem on my way to Jozi earlier in the year and wanted to do the same.  Unfortunately it was cloudy which meant the sunset wasn't going to be as spectacular and I decided not to stick around, but sharing the view with Madiba was still special.
Posted by Firefly the Travel Guy at 10:24 PM