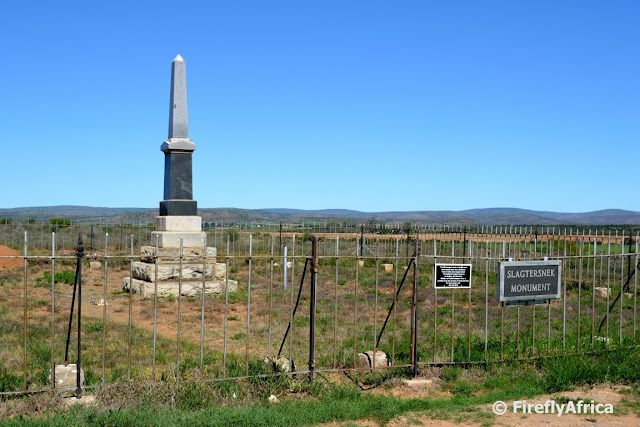 If you are flying along in a northerly direction through the Karoo Heartland on the N10, the main drag between Port Elizabeth and Cradock, do slow down a bit after you pass the first turnoff to Somerset East and keep a look out on the right hand side of the road for a cenotaph like monument.  Once spotted, do pull over and have a look as this is a very significant spot in the early history of the area.

I'm not going to relate the whole story here, but you can go and read the whole article about Slachter's Nek on the Somerset East website.  In short, the story is about a violent Boer uprising in the area late in 1815.  After most of those involved either surrendered or were arrested, they were charged and either cleared, imprisoned or banished.  Five were sentenced to death by public hanging at Van Aardtspos on 9 March 1816.  The hangman never realised that there were five to be hanged so old rope was used.  Four of the five ropes broke and Landdrost Jacob Culyer (of the Uitenhage district) ordered that they be hanged a second time, this time one by one.  The monument contains the names of the five that was hanged as well as the Bezuidenhout brothers, who were whole reason the uprising started. 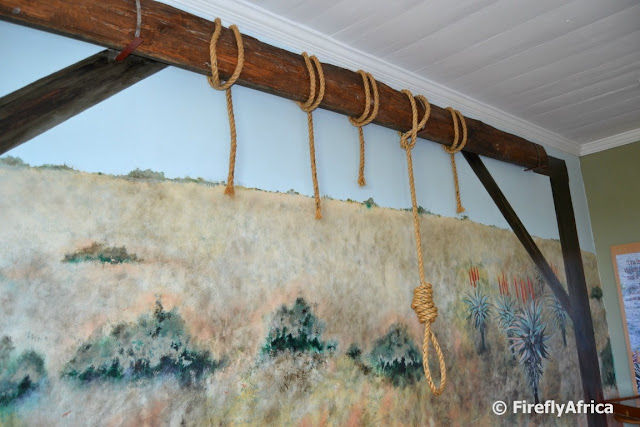 Another interesting link to Slagternek can be found in the Somerset East Museum in town.  The original beam that was used for the hanging is on display in one of the upstairs rooms.  After the hanging the beam was used as a support beam in a farmer's pigsty where it was found in the late 1940's and taken to the Voortrekker Monument.  In 1989 it landed up in the Cape Town Historical Museum before it was eventually returned to Somerset East.
Posted by Firefly the Travel Guy at 3:00 PM