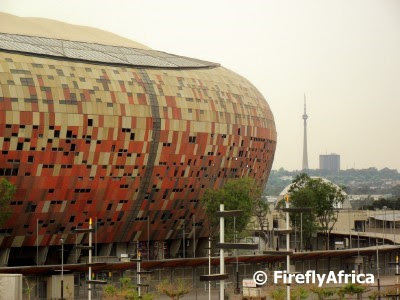 As we entered Johannesburg on our recent visit, Chaos Boy asked if we were in Soccer City now.  I was very impressed that he associated Soccer City with Johannesburg.  He was of cause not refering to the city itself, but to the soccer stadium where the final of the recent 2010 FIFA World Cup took place.  We dicided to fit in a quick stop at Soccer City during our stay in Jozi. Even though most people refer to the stadium as Soccer City, as that was what it was known as during the World Cup, the official name of the stadium is the FNB Stadium.  Soccer City is situated close to Soweto on the western side of Johannesburg.  The stadium was revamped before the World Cup and became the largest stadium in Africa.  It has a seeting capacity of 94 700 people.  With it being so big one would think that some spectators would be quite far from the action, but nobody is seated more than 100 metres (330 ft) from the field, and there are no restricted views in the stadium. 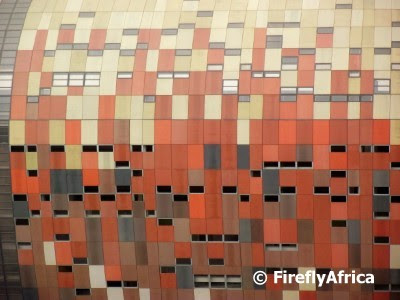 The stadium has a very unique look.  It was designed to resemble a calabash which is another word for an African pot or gourd.  Its a pity there were no games on when we were in Gauteng as the stadium is stunning at night with its lights shining through the gaps in its exterior.  Truly a world class stadium.
Posted by Firefly the Travel Guy at 2:00 PM