This is my last Bloemfontein post from this trip, I promise.  I was actually very disappointed that I didn't have time to explore the city some more.  I have never been to Bloemfontein before and it has so many places, most of historical value, to see.  The one thing I did notice is that there are many statues around Bloemfontein.  Bloemfontein used to be the capital of the Boer republic of the Orange Free State﻿ and many leaders involved in the Anglo Boer War and in the establishment of the Union of South Africa came from here.  Below follows a couple I saw.  Some of them you may have spotted in posts over the last week already. 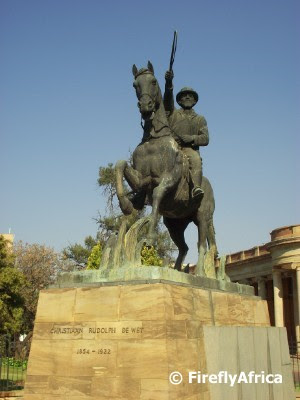 Standing in front of the Fourth Raadsaal is the imposing figure of General Christiaan de Wet (1854 - 1922). De Wet played a major role in the Anglo Boer War (1899 - 1902) as a general.  During the war he was regarded more and more as the most formidable leader of the Boers in their guerrilla warfare.  In 1902, during peace negotiations after the war, he even acted as State President of the Orange Free State ever so briefly.  For only two days in fact when Presedent Steyn had to leave negotiations due to illness. 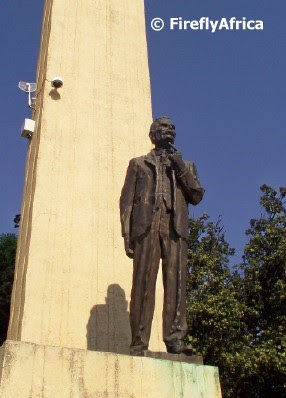 Hertzog Square across the road from the Bloemfontein City Hall, stand a statue to James Barry Munnik (JBM) Hertzog (1866 - 1942).  Hertzog rose to the rank of general during the Anglo Boer War, becoming the assistant chief commandant of the military forces of the Orange Free State.  Hertzog became Prime Minister of South Africa in 1924 when his party defeated that of Gen Jan Smuts.  He stayed in office until 1939. 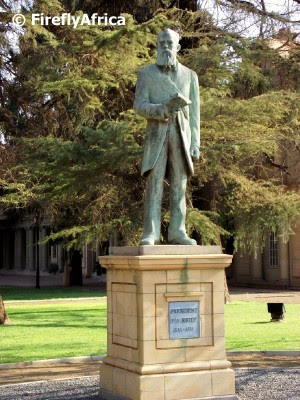 Francis William Reitz (1844 – 1934) had an extremely varied political and judicial career that lasted for over forty-five years and spanned four separate political entities.  Reitz started his political career as a representative on the Cape Colony Parliament.  He was Chief State Justice of the Orange Free State ( 1876 - 1889) before becoming the Boer republic's 5th State President (1889 – 1895).  From 1898 until 1902 he was the State Secretary of the South African Republic (the Boer republic of the Transvaal) before being President of the Senate of the Union of South Africa from 1910 - 1921. 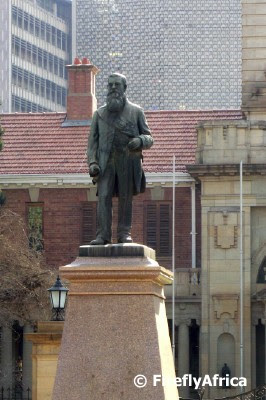 The last statue I want to show is that of President Johannes Henricus Brand (1823 - 1888) in front of the National Afrikaans Literature Museum.  Brand was the 4th State President of the Orange Free State from1864 until his death in 1888. He was such a popular president that the main road in the Bloemfontein city centre was named "President Brand" in his honour.
Posted by Firefly the Travel Guy at 2:00 PM