The city of Bloemfontein (Bloem meaning bloom or flower and fontein meaning fountain)﻿ is the capital of the Free State province and is situated roughly in the centre of South Africa.  The city's nickname is the City of Roses (although there wasn't really any roses in bloom around at the time of my visit. Perhaps I was in the wrong part of town for it) and its also the judicial capital of South Africa as this is where the country's Supreme Court of Appeal is situated.  The city's Sesotho name is Mangaung, meaning "place of cheetahs" and it has been included in the Mangaung Local Municipality since 2000. 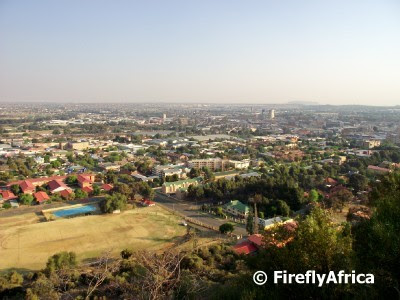 The city (1,395 metres above sea level) is surrounded by the flat grass lands of the Free State which is mostly farming areas.  As there aren't many high points around the city, Naval Hill stands out quite clearly and for the best view of the city, one has to take a drive up to one of the view points on the hill.

A panorama view from Naval Hill
Posted by Firefly the Travel Guy at 2:00 PM