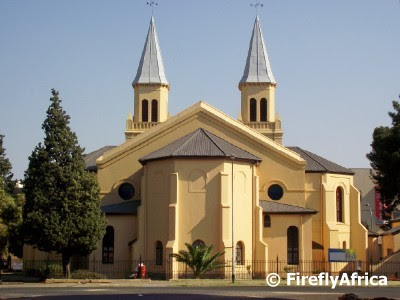 The 'Tweetoringkerk' (Twin Towered Church) in Bloemfontein is one of the city's most notable buildings. It's cornerstone was laid by President Brand in 1878. It was built in the German neo-Gothic style and inuargirated on 7 May 1880.  Up to then the occasion was the biggest Bloemfontein has ever seen with about 6 000 people attending, most of them from the surrounding farms. 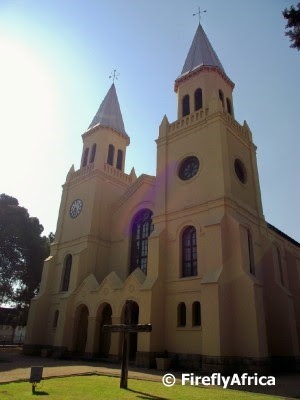 The church has changed its face from the old Afrikaans only Dutch Reformed Church to what is now known as the "Towers of Hope" congregation.  The services are attended by people of all colours, from white farmers and their families to homeless people living on the street in the surrounding areas.  The church also offers a daily (17:00) soup kitchen, food parcels that are distributed all over town and a needle work job creation project.  Other projects have started out of the church's vision with a teacher offering her services in the afternoons to teach homeless adults to read and write, young lawyers assisting the homeless with legal advice and two doctors who come in after work to offer medical help to those in need. Truly an example that could  be followed by many others.
Posted by Firefly the Travel Guy at 2:00 PM