Some people probably think caves are all small damp passages full of creepy crawlies and only accessible to the most adventurous. If so then clearly those some people have never been to the Cango Caves outside Oudtshoorn in the Klein Karoo. The Cango Caves are magnificent, huge and probably one of the best show caves in the world to visit. What makes it even better to visit is the fact the because the caves go into the mountain and not down under ground, the temperature inside remains at a constant 18°C (67°F) and you don't even need to take along a jacket. 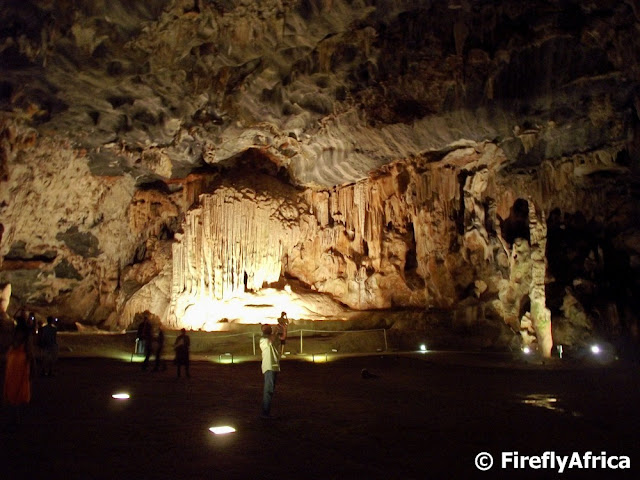 The Cango Caves were discovered by herdsmen looking for lost sheep in the 1770's.  The first person to explore the caves was a local farmer named Jacobus van Zyl who was lowered by rope, holding nothing but a candle, into the first hall.  These days you enter this first hall via steps with electric lights all around and as you look out into it from the top you realise how special the Cango Caves really is.  After the guide's introduction they normally switch off all the lights to show visitors what Van Zyl would have experienced way back then.  This spacious hall, named the Van Zyl's Hall, is over 90 metres long, 50 metres wide at its widest point, and between 14 and 18 metres high.  There is nearly 100 metres of solid limestone rock separating the cavern from the ridge above. Van Zyl's Hall is dominated by the Giant Organ Pipes, a spectacular flow stone combination, and Cleopatra's Needle, a stalactite estimated to be in excess of 150 000 years old. 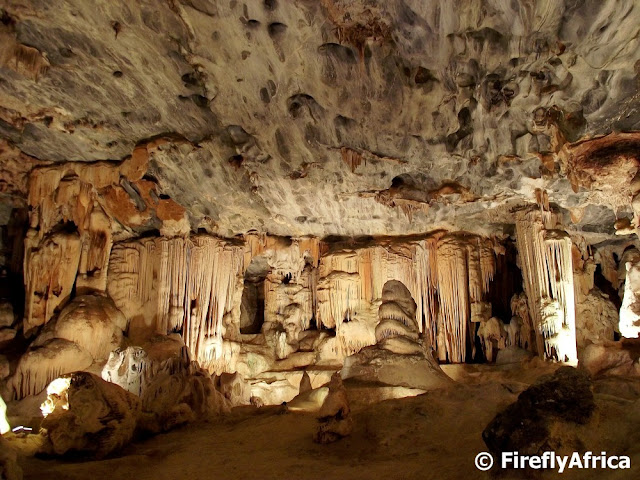 The second hall, and probably the most spectacular on the tour, was only discovered several years later.  The Botha's Hall draws gasps and "ooh's and aah's" when the guide switches on the lights.  It really is stunningly beautiful and, like the Van Zyl's Hall, huge.  There are two completed columns at the entrance to the hall.  The largest, an ancient formation some 500 000 years old, is known as The Leaning Tower of Pisa.  Next to is stands a soaring 13 metres high column approximately 250 000 years old.  From here the rest of the standard tour covers a couple of smaller halls before you do the return walk to the entrance.  Visitors on the Adventure Tour will continue on slipping, sliding and squeezing through tunnels called The Coffin, Devil's Post Box and Lumbago Ally amongst others.  This section really is only suitable for letters, and not parcels. 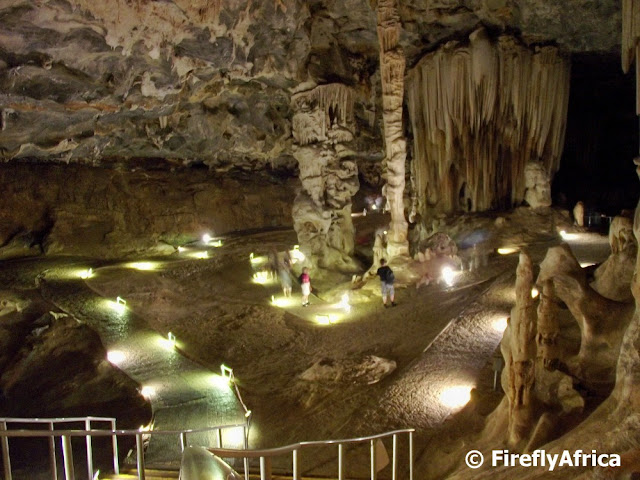 What visitors see on these two tours is only part of the extensive caves complex.  With visitors coming through Cango 1 since the end of the 18th century, this section of the caves can't really be called living caves anymore.  This is the reason why the public doesn't get to see Cango 2 and onwards.  That section of the caves are untouched, wet and still growing with no human hands that have broken off pieces, too many breaths making CO2 or electric lights intervering.

The Cango Caves have been at the forefront of tourism in South Africa since the end of the 18th century.  Its the oldest tourist attraction in the country, the first to employ a full-time tourist guide and the first to be protected by environmental legislation, implemented in 1820.  My only complaint? Not being allowed to take in my small tripod to be able to take better pictures for this article.
Posted by Firefly the Travel Guy at 10:16 AM