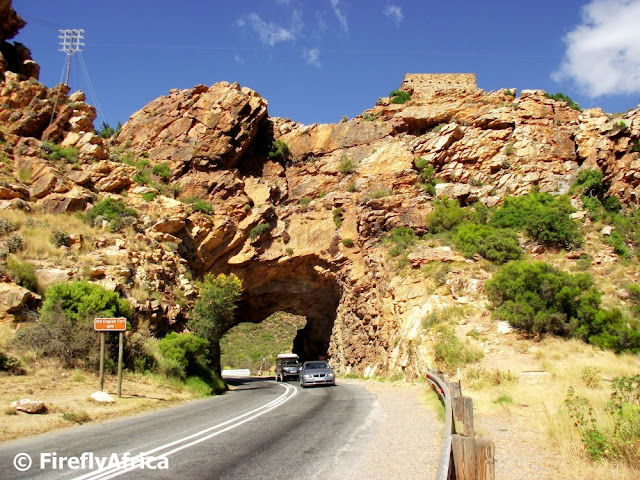 Cogmans Kloof outside Montagu is one of the famous landmarks on Route 62 through the Klein Karoo.  The Cogmans Kloof Pass passes through a poort (a poort being defined as a path through a mountain range) which runs through the Langeberg between Ashton and Montagu.  The first white farmers in the area were allocated farms from 1725 onwards and the original road through the poort was a dangerous one alongside the Kingna River which incorporates eight hazardous drifts.  To get around Kalkoenkrantz the wagons had to actually travel in the riverbed itself.  This route was very susceptible to flooding.  Authorisation was given to built a road in 1861 with work only starting in 1867, stopping again in 1870.  Thomas Bain, son of Andrew Geddes Bain, surveyed the pass and work was restarted in 1873 with the biggest job being to blast a tunnel through Kalkoenkrantz.  Up to that time blasting was generally done with gunpowder, but the Cogmanskloof tunnel, which is 16 metres long and had a 5 metre high roof, became the first time in South Africa that a tunnel was blasted using dynamite.
Posted by Firefly the Travel Guy at 11:39 AM