Some people get real excited by seeing lions and elephants or even something rare like an aardwolf in real life on a game drive.  The Damselfly had her moment when she saw real live hippos for the first time at Lalibela Game Reserve near Port Elizabeth. What made the sighting even better was that there were a number of this huge semi-aquatic mammals in the dam when we got there and the one then proceeded to get up so that we could get a better look. 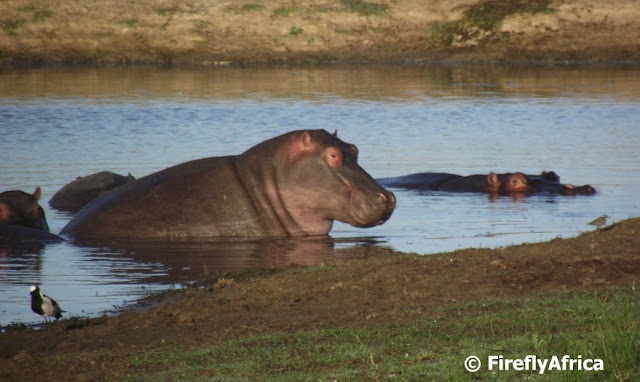 The word hippopotamus (Hippopotamus amphibius), or hippo, comes from the ancient Greek for "river horse".   They are found in sub-Saharan Africa and inhabits rivers, lakes and mangrove swamps.  The hippopotamus is the third largest land mammal (weighing between 1½ and 3 tonnes) after the elephant and white rhinoceros.  The Big 5 was named so as they were the five most dangerous animals to hunt and the hippo doesn't get included in this exclusive club as it is quite easy to shoot hippos where they live in the water.  Don't let their calmness fool you though.  The hippo is one of the most aggressive creatures in the world and is often regarded as one of the most dangerous animals in Africa.  Even with its short legs and big body it can reach a speed of 30 km/h (19 mph) over short distances and thus easily outrun a human. 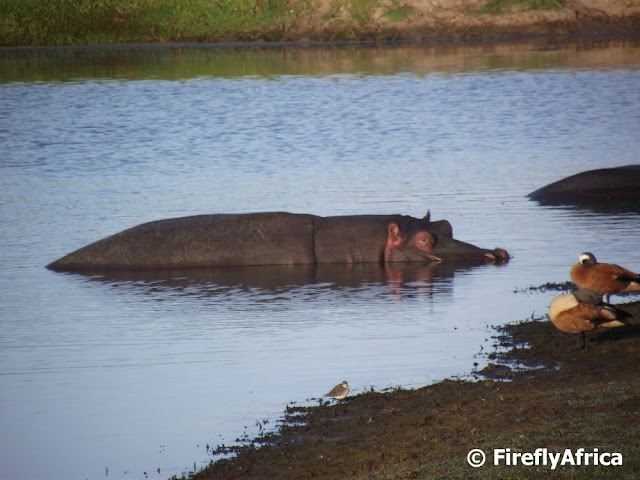 Female hippos is sexually maturity at five to six years of age and have a gestation period of 8 months.  Mating occurs in the water with the female submerged for most of the encounter, her head only emerging every now and then to draw breath.  Baby hippos are born underwater at a weight between 25 and 45 kg and must swim to the surface to take their first breath.  Young hippos often rest on their mothers' backs when the water that is too deep for them and they swim underwater to suckle.
There is a ton of information on Wikipedia for those wanting to know more.
Posted by Firefly the Travel Guy at 11:59 AM