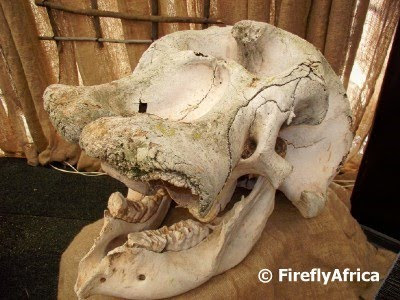 Elephants are amazing animals and its not often one gets to see an elephant's skull. The other day I had the pleasure to see one up close at an exhibit. An elephant can weigh up to 5 or 6 tons which means that it's skull is of considerable size. The interesting thing about the skull is that its not solid bone, but consist of tubes like the inside of a plane's wing. 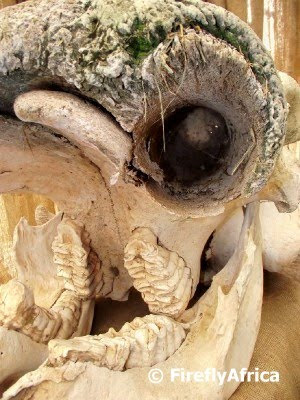 The skull didn't have it's tusks in, but the holes in which they go was clearly visible. An Elephant's tusks grow continuously at up to 18 cm (7 in) a year. Tusks are mainly used to dig for food and water, to debark trees and to move trees and branches when clearing a path. Interestingly elephants are typically right or left tusked just like people are right or left handed. You will normally find that the preferred tusk will be slightly shorter and less more rounded from the wear and tear. Tusks can be up to 3 meters in length and can weigh nearly 100 kilograms each. 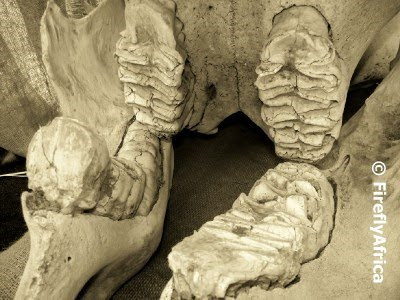 Elephants have six sets of molars during their lifetime. As a set gets worn away it's pushed out by a new set of teeth that has been growing in the back of its mouth. The first set falls out at about two years, the second set at six years, the third between 13 and 15 years and the fourth set at about 28 years of age. The sixth set replaces the fifth at about 43 years old with it having to last the elephant for the rest of its life. Elephants normally get about 60 years old and the main reasons they die is that their teeth are now worn away and, unable to feed properly, they start loosing conditioning and die. Who knows, perhaps if we could supply elephants with dentures they may grow much older than they do.
Posted by Firefly the Travel Guy at 2:00 PM