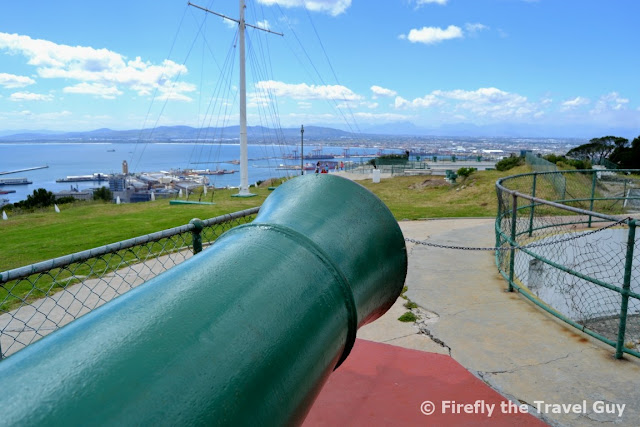 It's a beautiful late morning in the Cape Town City Bowl.  Not much of a breeze blowing and Table Mountain, without a table cloth draped over it, rises up behind the city in all her glory.  Peaceful.  Visitors and locals alike are going about their daily routine, heading between meetings, window shopping, grabbing a quick coffee, sightseeing... Suddenly, BOOM! Pigeons fly up from the pavement, a couple of American tourists duck for cover, a Joburg businessman jerks his head up, a travel blogger from PE nearly drops her camera and a small group of Germans recompose themselves when they realised that nobody else reacted to the sound.  A local sipping his cappuccino at a table on the pavement outside one of the many coffee shops just shake his head and smile.  The Noon Gun gets them every time. 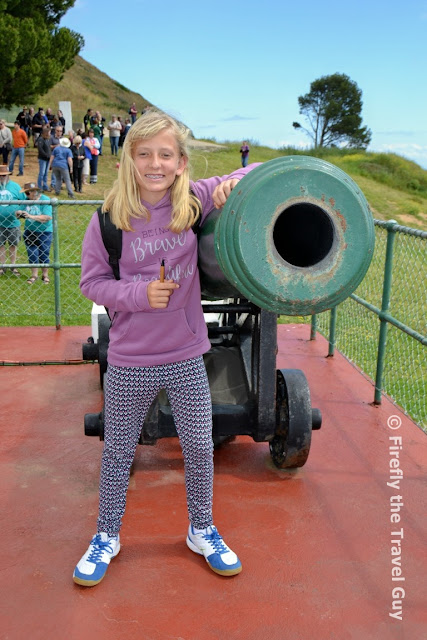 Although I get to visit Cape Town two or three times a year and enjoys going up to Signal Hill for sunset, I haven't been to see the Noon Gun in probably close to a decade and a half.  A visit to the Noon Gun during a quick trip to the Geocaching MEGA in the Mother City meant I didn't just get to go and see the gun fire again, but also show it to my family who made the trip down with me.

The Noon Gun (which are actually two cannons, the second just in case the first one fails) are situated on the side of Signal Hill overlooking the City Bowl and Sea Point.  About 15 minutes before it is time to fire, a red flag is raised and a member of the SA Navy steps up to prepare the guns for the daily shot.  Everybody stood a bit closer and a quick history lesson followed.

The Noon Gun has been fired since February 1806 and the two original guns are still in use today.  The guns were cast in England in 1794 and brought to the Cape a year later while under British occupation, apparently making the two guns the oldest guns in daily use in the world.  The reasoning behind firing a shot at noon every day (except for Sundays and Public Holidays) was, according to local tradition, to allow ships in port to check the accuracy of their marine chronometers.  Even though a Time Ball was taken into use in 1818, the gun continued to fire daily till this day and many Cape Townian still set their watches to it.  In 1864 they started to trigger the gun remotely from the master clock of the oldest timekeeper in the country, the South African Astronomical Observatory, thanks to the advent of the galvanic telegraph. 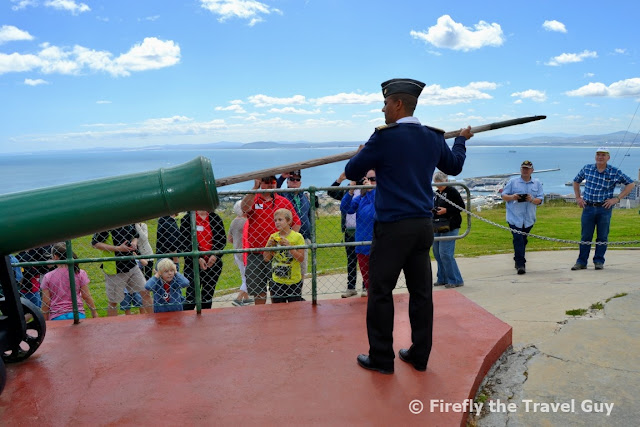 Both 18-pounder smoothbore muzzleloaders are loaded daily (six days a week as mentioned previously) with 1,5 kg of gunpowder each.  If the remote trigger on the first gun fails for some reason, then the Cannoneer on duty will quickly change over and fire the second gun manually.  You don't get to see somebody load a cannon with a rammer every day, but you do at the Noon Gun when a rammer gets used to tamp the charge into the muzzle. 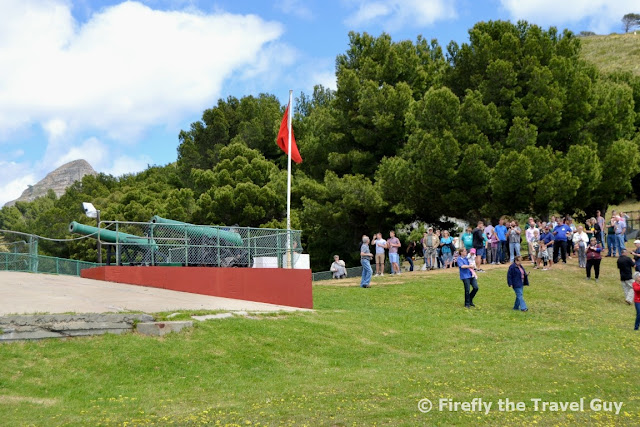 With noon approaching and everything in place for the gun to be fired, we were all asked to stand away a short distance.  If you are afraid you'll get too much of a fright because of the sound, then standing behind the guns are best, but for the best view then a side position is the place to be.  Cameras and phones got lined up and suddenly it was time.  The countdown started at 10... 9... 8... 7... a quick check if the camera was focused properly... 6... 5... the lady next to me giggled nervously... 4... 3... it was time... 2... 1... BOOOOOM! Smoke everywhere. Exclamations all over.  Wow, that was slightly louder than most expected.  Quick check to see what my photo looks like and disappointment.  A total blur.  The shock of the BOOM messed with my focus.

A couple of my Geocaching friends did get video clips of the gun going off though and I'm nicking Penny's one to share with you.

Getting to the Noon Gun is quite easy actually.  Just follow the "Noon Gun" signs from the corner of Buitengracht and Bloem Streets up through the Bo-Kaap along Military Road.  Just take it easy going up though as the road is steep and winding and there's always just that one guy who will come flying down from the other direction.

The best part of visiting the Noon Gun?  It is totally FREE!!!
Posted by Firefly the Travel Guy at 12:32 PM