I am leaving today for an exhibit in South America called South Africa Explore. On 9 September we will be in Sao Paulo, Brazil and on 11 September in Buenos Aires, Argentina. The exhibit is aimed specifically to promote South Africa as a tourist destination and in our case to try and get visitors to come to Port Elizabeth (actually the whole metropolitan area of Nelson Mandela Bay) and the Eastern Cape. I may not have the opportunity to do posts from that side, but promise to come back with loads of awesome pics from that side of the world. I will be back here on 13 September, so in the meantime, chat amongst yourselves like the elephants at the Addo Elephant National Park below. See ya later! 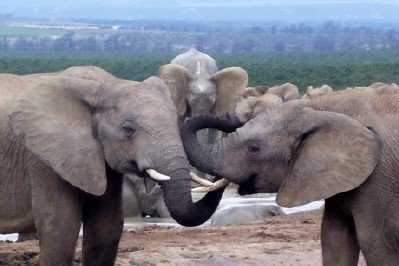 Posted by Firefly the Travel Guy at 10:14 PM