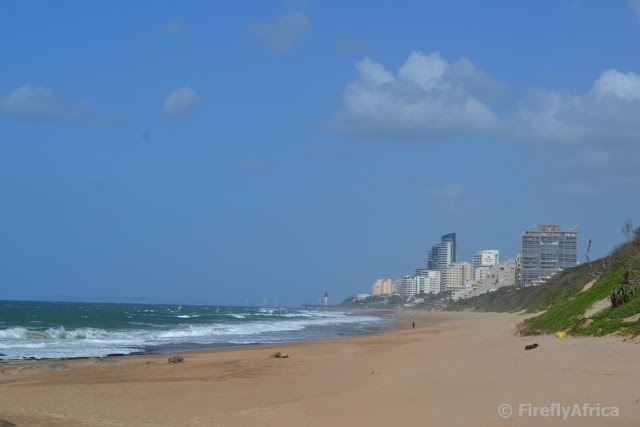 Everybody knows I like to explore and in South Africa we really have so much to discover.  So when an invitation to visit Umhlanga and bring the Damselfly along came from the Holiday Inn Express Umhlanga, I jumped at the chance to see a new place and share it with my wife.  With two nights in the hotel it meant that we had a whole day to explore the coast around Umhlanga Rocks on foot and really take in what this very popular beach destination has to offer.

Waking up Saturday morning we were met with a gale force wind when we opened our hotel room balcony door.  "Oh no!"  Not the ideal beach weather but nothing short of a hurricane would have stopped us getting out there to see what there was to see.  We grabbed a taxi from the hotel and he dropped us off behind the Breakers Resort which is the last hotel on Lagoon Drive on the northern side of town.  From there we followed a short path down to the beach and hit the sand.  Or more like the sand hit us, but the wind was from behind and our sails were set. 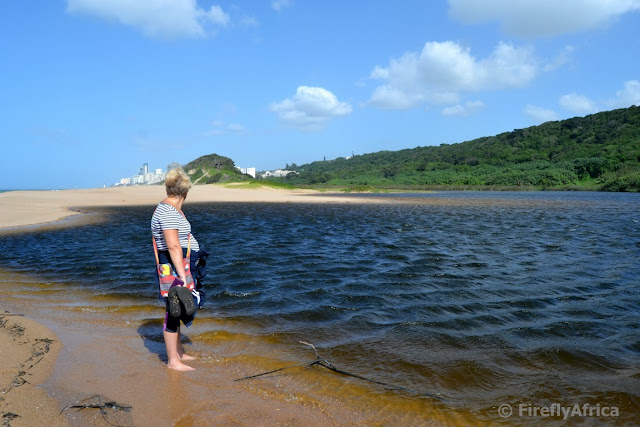 Our first Umhlanga destination waited for us a few hundred meters up the beach.  The beautiful Umhlanga Lagoon.  Umhlanga is a Zulu work which means "place of reeds" and the river and lagoon is definitely where the name originated.  Umhlanga Lagoon isn't just a stunning scenic spot, it's also a well known... erm... come closer... *whispering* unofficial nudist beach.  Yes you heard me, don't pretend like you didn't sit up when I said it.  Or rather you read it.  So just to repeat myself quickly in case you didn't, Umhlanga Lagoon is a nudist beach.  Something I found out a few years ago when I got curious about the state of naturism in South Africa and did a little bit of research.  I wasn't expecting many nudists to be hanging around (excuse the pun) with the gale force wind as you won't just end up with sand in every possible crevice, but also have the skin sandblasted off your... Ja, you get what I mean.  I have to add though that there was a guy who arrived just before us and when he reappeared from behind the dune he was wearing his birthday suit.  It didn't last long though as he was heading back fully clothed before we even turned around.  I'm sure he's still trying to rinse sand out everywhere. 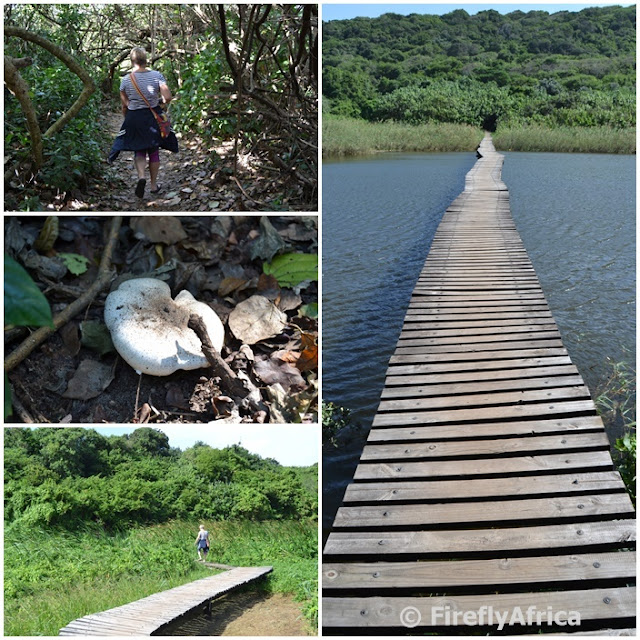 We weren't keen to walk back along the coast right into the wind so veered off the beach and onto the trails leading through the adjacent Umhlanga Lagoon Nature Reserve.  The reserve covers 26 hectares from the end of Lagoon Drive up to and including the lagoon and river mouth.  As soon as we hit the trails it was as if the wind had just died on us.  Totally sheltered we took a leisurely stroll back towards Umhlanga Rocks along one of the paths, passing a few other people along the way.  Clearly this is a very popular spot for a walk for young and old looking to break away to nature close to civilization. 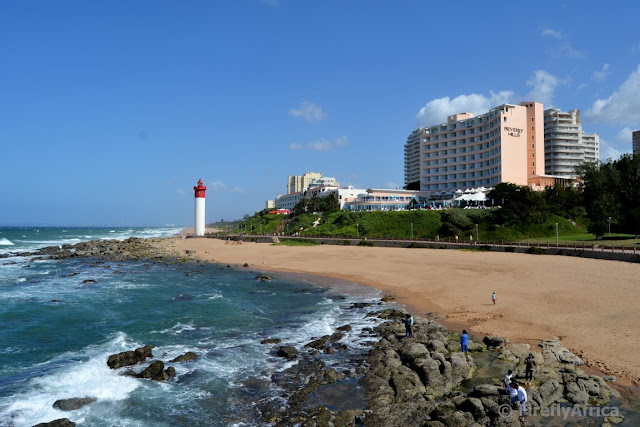 At Breakers we left the trail and followed the beachfront walkway between the buildings and the beach.  Still fairly sheltered against the wind it was a nice refreshing walk with a lot of restaurant options to get something to eat, vendors to buy something from to take back home as a gift and sea views.  Lots and lots of sea views.  It's not difficult to see why Umhlanga is such a popular destination.  We walked as far down as the iconic Umhlanga Lighthouse, built in 1954.  The circular concrete tower, painted white with a red band at the top, stands 21m high and must be one of the most recognised lighthouses on the South African coastline. 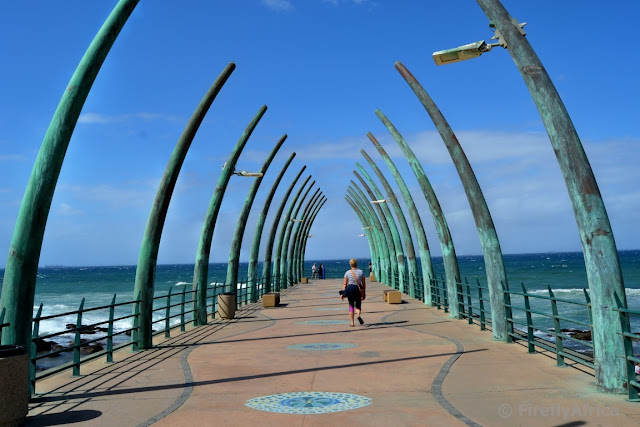 A little backtrack from the lighthouse brought us to the Umhlanga pier with it's curved "ribs".  The interesting part about the pier is that there is a large underground box culvert used to take storm water down to the sea with the pier being built on top of the extension taking the water out to a deep water channel 80 meters from the beach.  The wind nearly took us even further out but we just had to take a walk down to the end of the pier to enjoy the view.  From here we headed away from the beach to go and find something to eat and wait for our taxi back up to the hotel. 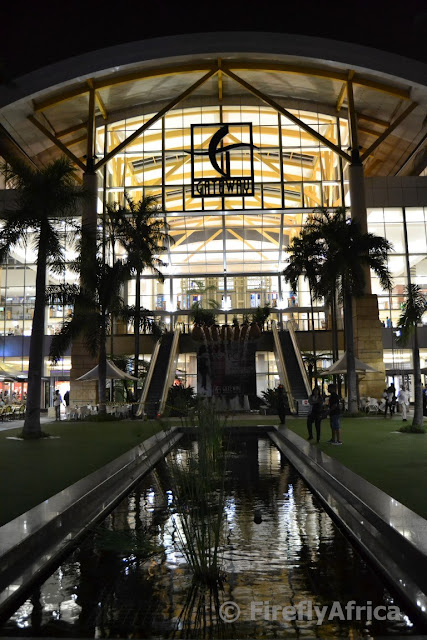 Staying at the Holiday Inn Express on Umhlanga Ridge meant that we were literally two blocks away from the Gateway Shopping Centre and we took a walk up to the mall on the Saturday evening for dinner.  Gateway is more than just a little collection of shops under one roof with a huge amount of retail stores, entertainment and restaurants to pick and choose from.  After a little retail therapy and a look around the Wave House we found ourselves a spot to enjoy some good sushi and wine before moseying back to the hotel. 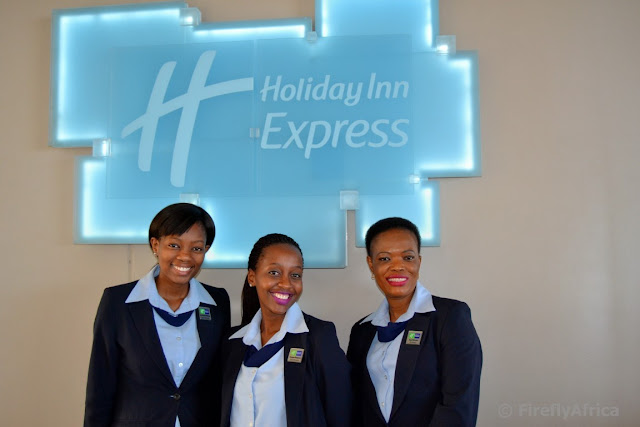 Umhlanga has a wide range of accommodation options with the ones down on the coast being more expensive than those up on the ridge.  We stayed at the Holiday Inn Express Umhlanga (do go and read my review) and the fact that it wasn't right on the beach didn't effect our holiday at all.  In actual fact it's very nicely located to enjoy both the beachfront as well as the Gateway Shopping Centre, has great views, very spacious and comfortable rooms (mush more so than what I was expecting), always friendly staff and all in all a very good choice for an express holiday in Umhlanga.

Disclosure: We were invited for a weekend at the Holiday Inn Express Umhlanga by the InterContinental Hotels Group and they carried all the costs for the weekend.  They asked for a blog post to be written but had no editorial input in the content of the post.
Posted by Firefly the Travel Guy at 3:00 PM