The St Francis Bay / Cape St Francis area has a number of hiking options and with such a stunning coastline how can it not?  Most of the walks are shorter hikes and include coastal walks like the Blowhole Walk, Bay to Bay Walk, Shark Point Walk, Wild Side Meander and the Two Harbours Walk.  There are also walks through the Irma Booysen Flower Reserve and up into the dune fields at the Sand River.  If you really want to experience the best hikes the area has to offer then the four day slack packing Chokka Trail is just for you.  We unfortunately only had one full day during our St Francis breakaway weekend so decided on two of the shorter walks. 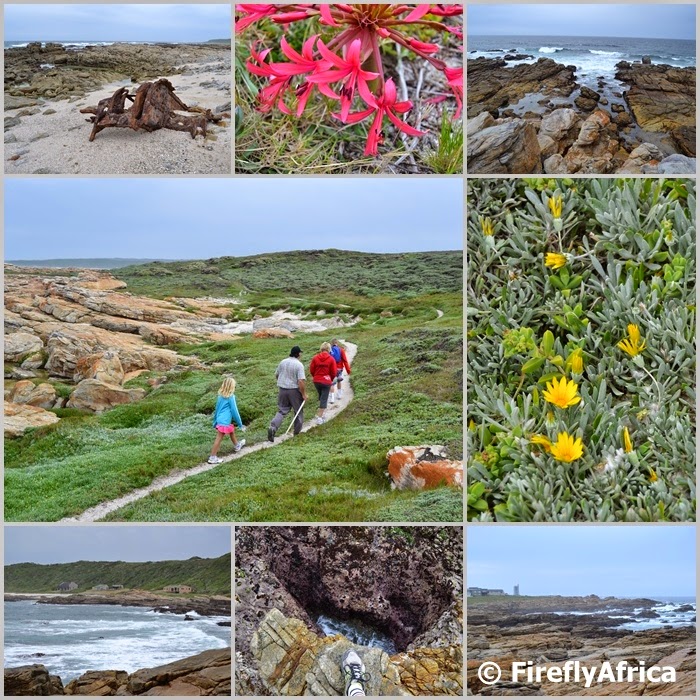 The weather on the Saturday morning was cool which meant perfect conditions for a walk.  Our first walk was along the Blowhole Trail which was a nice and easy 5km return trip.  As we were about the set off from the parking lot at Cape St Francis' Wild Side, another car pulled up and hooted at us.  Turned out to be a couple of Geocachers from Port Elizabeth spending the day doing caches in the area and also on their way to the blowhole to do the cache over there.  Suddenly our little part of four became a party of seven with two Jack Russells.

The trail is a nice and easy one with beautiful views of the rugged coastline and surrounding Fynbos.  On the way we passed the wreck of "The Osprey".  Not that there is much left of this wreck dating back to 1867.  Most of the ship was built of wood which means that it has all but disappeared.  All that remains are a couple of small twisted pieces of metal.  It seemed that the ship just steamed straight into the land with no attempt to stop.  One sailor died in the wreck.  The Captain, Navigation Officer and another Lieutenant were all court-marshalled.

A short distance later we got to ground zero and the geocache (called Blowhole) was quickly found and the log signed by everybody.  But where is the actual blowhole and why couldn't we see it?  We fanned out over the rocks and it wasn't long before one of our party spotted it.  A hole in the rocks connected to an cave underneath.  Problem was out timing sucked and it was low tide. Darn!  At high tide the water washes into the cave and gets forced up through the hole with a bang.  Apparently quite impressive if the sea is quite high... which it obviously wasn't today.  Oh well, we'll have to come back at some other stage to come and experience it. 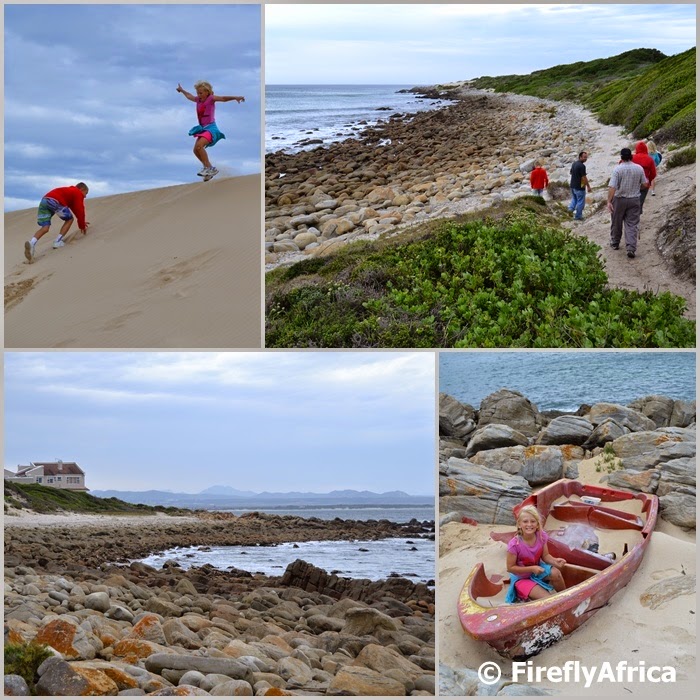 For our second walk we decided on the one to Shark Point.  The deciding factor?  Another Geocache of cause.  We decided not to make a too long a walk and approached it from a parking spot at the end of St Francis Drive as you come from the St Francis Bay side.  Other spots to start from is Port St Francis or the Cape St Francis side.  We went for the shortest walk we could find which meant about 2 km return.  This time our view was into St Francis Bay itself with the village of St Francis Bay, Paradise Beach and, further away, Jeffreys Bay visible.  The coastline was also slightly different from the rugged coast on the other side with more boulders than actual rocks.

Shark Point is the second point you find as you come into St Francis Bay from the west.  The main point where you will find the lighthouse is Seal Point and it was this second point that led to the demise of the Genesis, a racing yacht that ran aground here in 1994.  The shattered mid section of the hull can still be seen at the point.  At our turning point we found what we were looking for.  The oldest active Geocache in the Eastern Cape, Port Elizabeth - St Francis, placed in 2001.

St Francis Bay is the perfect destination for somebody who loves the ocean, loves exploring the coastline and loves walking and going on short hikes. Do make a plan to visit and #ExperienceEastCape.

Posted by Firefly the Travel Guy at 8:39 PM