Regyne - the biggest commercial protea farm in the world 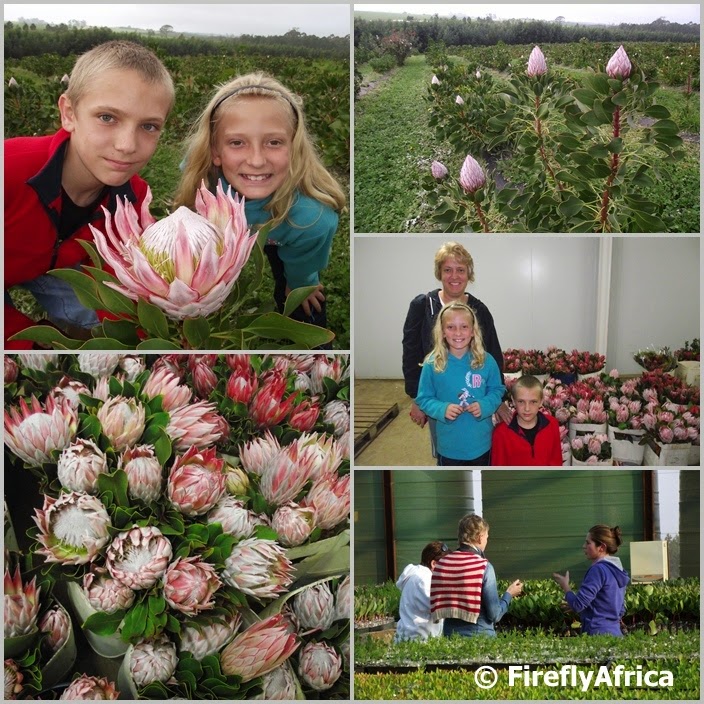 The Tsitsikamma is more than just indigenous forests, rugged coastlines and adrenalin filled adventure activities.  I'm going to lie if I say I didn't know it, but its always great to spread the word.  Our Sho't Left in the Tsitsikamma and Eersterivier area included a visit to Regyne, the biggest commercial protea farm in the world.  Tours of the farm is organised by Oudebosch Farm Stall who does a tour and lunch as well as a tour and afternoon tea and cake option for groups.

Joining us on the tour were fellow travel bloggers Dawn Jorgensen of The Incidental Tourist, Di Brown of The Roaming Giraffe and Linda Markovina of Moving Sushi.  We were met by Hanli Viljoen who took us on a tour of the farm and its facilities.  Regyne's protea fields cover 80 hectares and they produce flowers primarily for the export market.  Proteas are cut, sorted and trucked straight to the airport for export.  Hanli started off by showing us their sorting shed and cold room.  Because it was weekend there were no staff on site, but she explained the process they followed.  Most of the proteas were shipped out the day before but there were still an impressive variety of flowers in the cold room for us to see.  From here we moved onto the protea nursery where Hanli spends most of her day.  It was unbelievable that the proteas are actually grown from seed and how the seedlings are handled before going into a field.  We also visited one of the fields where they grow King Proteas, South Africa's national flower.  Seeing them grow like that makes me want some in my own garden.  I didn't think the KidZ would be very interested in the farm, but they actually paid very close attention and I think enjoyed it and learned as much as we did.

Posted by Firefly the Travel Guy at 8:30 AM