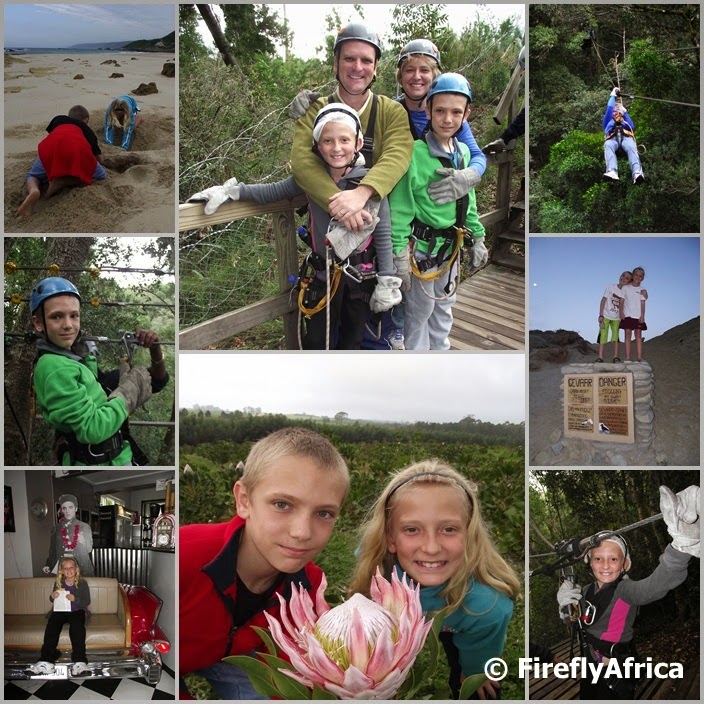 We really don't need much motivation to pack our bags and head somewhere for a Sho't Left weekend.  Not at all.  Even more so when the invitation for that Sho't Left comes from the Tsitsikamma which is only an hour and a half from our home base in Port Elizabeth.
A call from Penny of Tsitsikamma Seaside Accommodation along with an earlier invitation by Anneline of Storms River Adventures had us planning a weekend that included some beach time, nature time, family time and ultimately, adrenalin time.
An early departure on Friday afternoon had us driving west on the N2 from PE and taking the Oudebosch turnoff on the eastern side of the Tsitsikamma.  A short time later we reached the seaside town resort village cluster of houses called Eersterivier.  Eersterivier is just that, a collection of holiday homes along the beautiful Tsitsikamma coastline and Penny manages 19 of these which get rented out to the public when the owners aren't using them.  We stayed in Shick Shack which was anything but just a shack.  It sleeps eight in four bedrooms and has a sublime view of the coastline from its deck .  Perfect to sit and relax on after a hard day of Tsitsikamma'ing.
Saturday morning we spent a bit of "beach time" exploring the Eersterivier beach with its fascinating fossil dunes and sandstone formations.  The two most notable features for me were the blue hole, perfect for swimming, and the blow hole which gets spectacular at high tide.  We decided to head inland for a little while and went to explore the town of Kareedouw just across the mountain before stopping at Oudebosch Farm Stall for lunch.  Just a few kilometers from Oudebosch is Regyne Protea Farm, the biggest commercial protea farm in the world.  Oudebosch Farm Stall organizes tours of the farm for groups during the week, but we were lucky enough to join a couple of travel bloggers on a private tour that afternoon.
Sunday started with a bit of a sleep in before packing up and returning to Oudebosch brunch.  Then it was time to head to Storms River Village for the highlight of our trip, a Tsitsikamma Canopy Tour with Storms River Adventures.  And what an adventure it was.  Being in the business I'm in I've had the opportunity and privilege to go on this a couple of times before, but it was a first for the rest of the Famdamily with Chaos Boy volunteering to take the lead just behind the guide.  Drama Princess was slightly nervous but the second guide was on top of things and she got to do a couple of tandem slides with him until she was comfortable enough to go on her own.  Sliding along the 10 slides through the canopy of the indigenous Tsitsikamma forest 30 meters up is always a highlight and something we will remember for a long time.
I will do separate posts with some more information about all the activities
we participated in in the coming weeks.
Disclosure: We enjoyed this visit as guests of Tsitsikamma Seaside Accommodation, Oudebosch Farm Stall, Storms River Adventures, Tsitsikamma Tourism and the team at ECTOUR.  I received no further remuneration, wasn't asked to write a positive post and keep full editorial control.
Posted by Firefly the Travel Guy at 11:33 AM