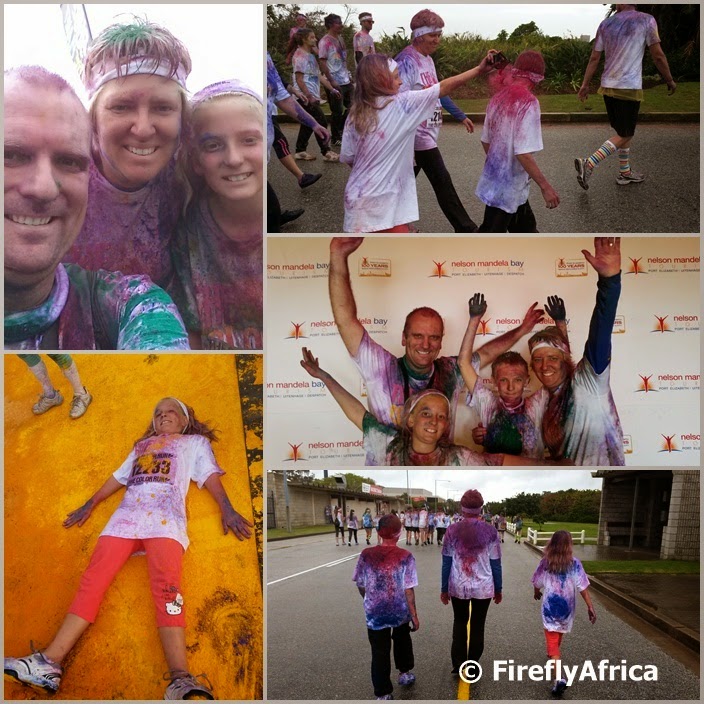 Last year the first ever Color Run in South Africa took place in Port Elizabeth, so it was appropriate for the city to stage the first South African one in 2014 again.  I got an invite from Nelson Mandela Bay Tourism to come and participate in the event along with the family and on a slightly cold and wet Sunday morning headed down to the Nelson Mandela Metropolitan University.  I wasn't sure how a powder paint event would go down in the rain and even if people would still rock up, but we weren't going to throw in the proverbial towel without at least finding out.  With dark clouds on the horizon we arrived at the start finish festival area but the music was pumping, the Algoa FM DJ's were working the crowd and people were being very festive.  As we lined up for the start the rain came down and for a minute there I thought people would head for their cars but Gordon Graham and the other joc's just turned up the volume and got people more in the spirit of... well... getting dirty while participating in the happiest 5k on the planet.  And that was what it was. 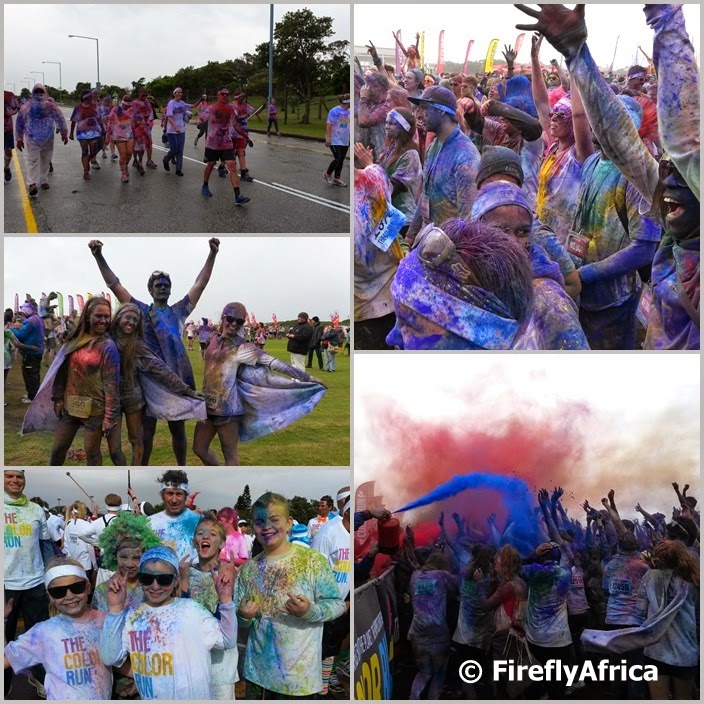 Once the gun went the rain was forgotten and the fun started.  I wouldn't quite call what we did the happiest 5k run on the planet.  Probably the happiest 5k stroll on the planet.  You can have more fun with each other and fellow participants while walking and that was what we did most of the way.  By the time we started most people were well and truly coloured, but as if that wasn't enough we had a new colour added to our designs at every one kilometer mark while there were music and entertainment mixed in-between.  By the time the finish line was reached most people were well and truly coloured in and most mothers would throw away clothes looking like ours.  The finish line wasn't the end of the party though and most runners gathered in front of the stage where a puff of paint went up every few seconds.  It truly was as if a flock of flying unicorns went over head all day long.
I'm sure there are a couple of people heading to work this morning with green, blue and pink coloured streaks in their hair and other body parts (he says looking at his purple hands while typing this).  Drama Princess for one has a purple glow to her hair while the Damselfly has a bright green wave on the top and pink in the back.  That after four washed yesterday.  A badge of honour warn in remembrance of an epic morning of dirty clean fun.  Or is it clean dirty fun?
Disclaimer: We participated in The Color Run as guests of the organisers and Nelson Mandela Bay Tourism.