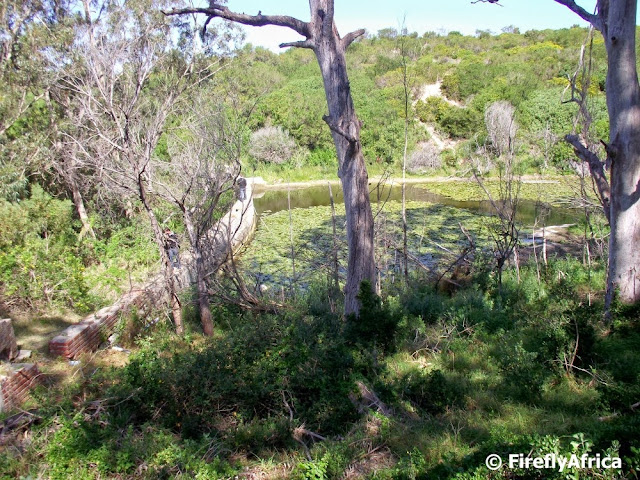 Growing up I wanted to be an archaeologist.  Somebody like Indiana Jones who discovered lost cities, found ancient artefacts and went places that most can just dream of.  So now I work in tourism and love travelling with the explorer in me always waiting just below the surface.  Since I started Geocaching my explorer persona gets released on a regular basis.  I may not go in search of artefacts but looking for a cache feels like the same thing.  Don't think I can call the locations where most caches are hidden anywhere close to being a lost city, but every so often I find a new cache to search for which is somewhere out of the ordinary.  Somewhere that brings out said explorer. One such cache made an appearance the other day courtesy of Thecrow01.  The cache was hidden at Frames Reservoir, Port Elizabeth's oldest dam.  Immediately an expedition was planned, even if it was just a quick one during lunch time.


In the early days of the settlement of Port Elizabeth the stream down what is now Donkin Street in Central, supplied the town with water.  As the town expanded, so more water was needed.  Frames Reservoir was completed in 1864 and can be found on the Shark River (further up the valley from Happy Valley) in Humewood.  It was built by Clement Wall Frames who leased the land from his cousin, C E Frames.  He formed the Shark River Water Company and they supplied the lower parts of town with water.  Unfortunately for Frames, due to pressure problems the higher lying areas lost out.  He went bankrupt as a result of the scheme and the municipality took it over. 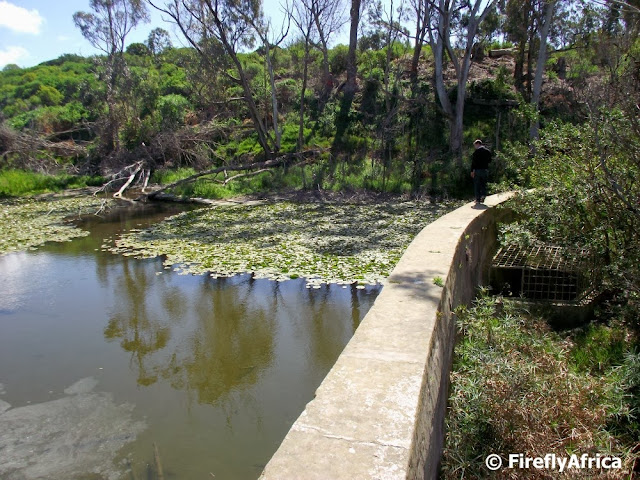 We (us being friends and fellow cachers Seekoei and erenei and obviously myself) approached the dam on a track from the old Boet Erasmus Stadium side.  The coordinates then took us off the track and along a path through the bush.  The valley suddenly opened up and there was this stunning spot and the dam.  I wonder if the local boys every come fishing here cause there was a couple of big fish splashing around when we were walking across the dam wall.  It really was a great experience to discover the dam.  Something I've heard about but have never seen.  Another great expedition and discovery thanks to Geocaching.
Posted by Firefly the Travel Guy at 1:33 PM