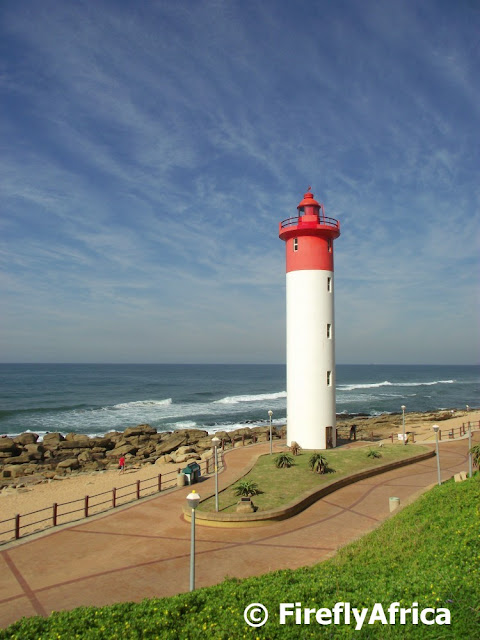 The 21 meter tall red and white Umhlanga Lighthouse is probably the best known lighthouse on the KwaZulu Natal coastline.  Umhlanga Rocks is situated on what was originally part of the sugar estate of Sir Marshall Campbell and means Place of Reeds in the Zulu language.  This refers to the beds of reeds that accumulate on the banks of the Ohlanga River a few kilometres north of town.  Incidentally Sir Marshall was also the person who introduced the colourful rickshaws to Durban's beachfront.  When a track was made from Mount Edgercombe to Umhlanga Rocks, the area became popular with local farmers who leased small plots on the shoreline to built vacation cottages.  From there it developed into the popular seaside resort it is today. 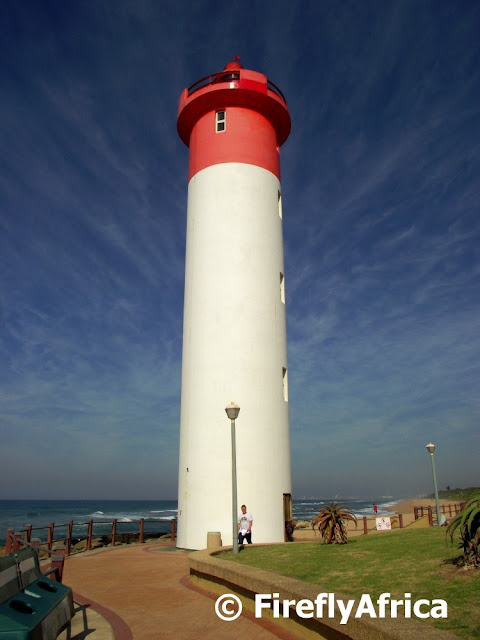 The lighthouse was completed in 1954 and replaced the Bluff Lighthouse, which was commissioned in 1869 but had to be abandoned due to its rapid deterioration.  The flashing light is a welcome sight to ships sailing into the safety of the Durban harbour.  Except for its main light its also has a fixed red light that enables ships waiting to anchor in the outer anchorage to monitor their position. If the red light can be seen, it suggests the ships' anchors have probably dragged and is too close to shore.  The Oyster Box Hotel, which was built in 1869 and was originally the first beach cottage in the area, has been the lighthouse's official warden right from the start and the lighthouse controls are in the hotel office where staff monitor the controls and report to Portnet's Lighthouse Service.
Posted by Firefly the Travel Guy at 3:00 PM