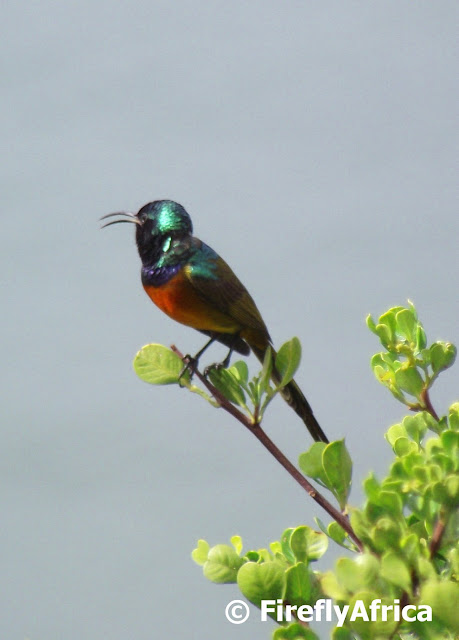 I don't always get great photographs of birds with my super zoom camera as its not nearly as fast as a DSLR, but the other day I was extremely lucky on a trip to Cape Town that this sunbird sat still long enough for me to snap a pic before he flew off.
The Orange-breasted Sunbird, Anthobaphes violacea, is the only member of the bird genus Anthobaphes and is endemic to the fynbos habitat of south-western South Africa.  Obviously due to its restricted range within fynbos this sunbird is associated with Ericas, from which it takes nectar, insects (often taken in flight) and spiders. It breeds when the heath flowers, typically in May. The male will defend its territory aggressively, attacking and chasing intruders.  The picture was taken in early April so he was probably still taking it easy before the chasing start.
Posted by Firefly the Travel Guy at 9:00 AM

Email ThisBlogThis!Share to TwitterShare to FacebookShare to Pinterest
Labels: birds