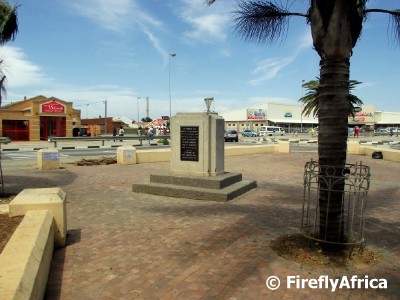 
There is a monument in the New Brighton township of Port Elizabeth to those who died on the SS Mendi in the First World War.  Blacks were not allowed to represent South Africa during the war as soldiers and those black people who did volunteer were sent to Europe as Labour Corps to do work like digging trenches.  The SS Mendi sailed from Cape Town transporting 823 members of the 5th Battalion, South African Native Labour Corps to France.  From Cape Town she went via Lagos to Plymouth before crossing the English Channel for Le Havre.  On 21 February 1917 at 5am in thick fog she was struck and cut almost in half by the SS Darro, an empty meat ship that was bound for Argentina. 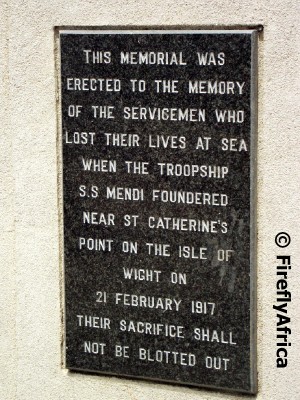 Inscription on the Mendi Memorial at New Brighton


616 South Africans (607 of them black troops) plus 30 British crew members died in the disaster.  The men of the South African Labour Corps came from a wide range of social backgrounds and different groups within South Africa, but the majority were from the rural areas of the Pondo Kingdom in the Eastern Cape.  Some men were killed outright in the collision while others were trapped below decks.  Many however gathered on the listing deck of the Mendi, but unfortunately very few of them could swim.

One of the most shocking parts of the incident is that the crew of the Darro made no attempt to rescue survivors and kept on sailing on. 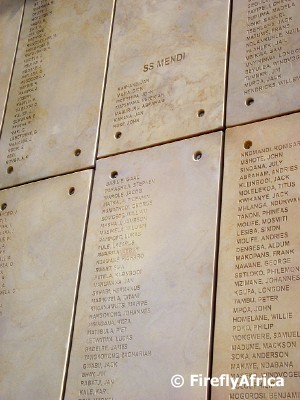 
Oral history records that the men met their fate with great dignity. Their chaplain, Reverend Isaac Dyobha, is reported to have calmed the panicked men by raising his arms aloft and crying out in a loud voice:

"Be quiet and calm, my countrymen. What is happening now is what you came to do...you are going to die, but that is what you came to do. Brothers, we are drilling the death drill. I, a Xhosa, say you are my brothers...Swazis, Pondos, Basotho...so let us die like brothers. We are the sons of Africa. Raise your war-cries, brothers, for though they made us leave our assegais in the kraal, our voices are left with our bodies."

They were stomping the "death drill" as the ship went under.
Posted by Firefly the Travel Guy at 12:22 PM