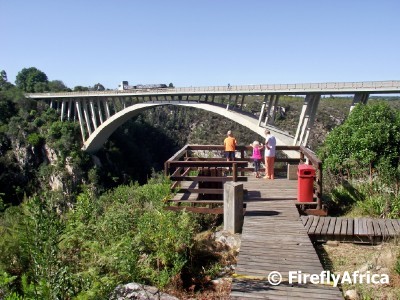 Driving westwards from Port Elizabeth onto the world famous and beautiful Garden Route, most people fly along the N2 highway for the first 160 kilometers and make their first stop at the Petroport in the Tsitsikamma.  From here on the Garden Route offers many towns, attractions, view sites, art shops and so much more for visitors.  The Petroport is located next to the Paul Sauer Bridge and in addition to filling up cars and tummies and emptying out bladders, visitors take a walk to the lookout platform or onto the walkway next to the bridge. 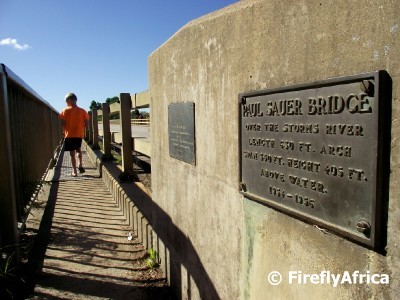 The arch bridge, also known as the Storms River Bridge, was completed in 1958 and forms a major link in the National Route N2 between George and Port Elizabeth. The bridge is one of four great arch bridges crossing the deep gorges of the Tsitsikamma and is about 120 meters high. 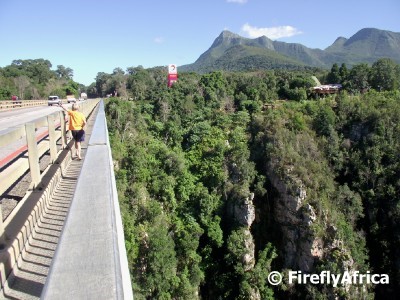 Taking a walk across the bridge you get a good idea of the deep and narrow gorges that rip open this part of the Garden Route and you get new respect for the early travelers trying to find a way to get to the other side.  Before the bridge was built travellers had to take the Storms River Pass which was built along the old elephant trails.  The old dirt road pass is now closed to traffic and only accessible on foot and mountain bikes.
Posted by Firefly the Travel Guy at 12:05 PM