We spent 10 days of our two week summer holiday in the Drakensberg camping in the stunningly beautiful Royal Natal National Park.  The 8000 hectare park was established in 1916 and received its name after the Royal family visited it in 1947.  Unlike the name suggests the park isn't a National Park run by SANParks, but a provincial park managed by the KwaZulu Natal Parks Board.  The majority of the Drakensberg mountains photos that I have posted and will be posting was taken inside the park. 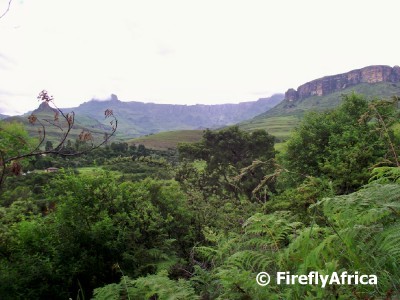 The main feature and attraction of the Royal Natal is the awe inspiring Amphitheatre.  The 5 kilometer wide 1220 meter high rock wall towers above the rest of the park and on a clear day is a stunning site from both inside the park as well as from the surrounding areas.  Mont-aux-Sources (3282 meters above sea level) is the highest point on top of the Amphitheatre and was named such as the area is the source of both the Orange River running west and the Thukela (Tugela) River running east. 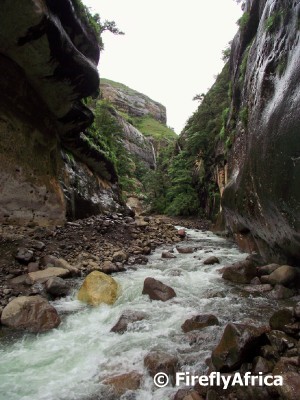 The main activity in the park is hiking with a number of excellent short and medium trails criss crossing the park taking in the mountains, rolling hills, streams and waterfalls.  The most popular walk is the trail up the Tugela Gorge.  The trail leads you up the river and into the gorge right up to the Amphitheatre where the Tugela Falls, the second highest waterfall in the world cascading down five free-leaping falls for a total of 948 meters. 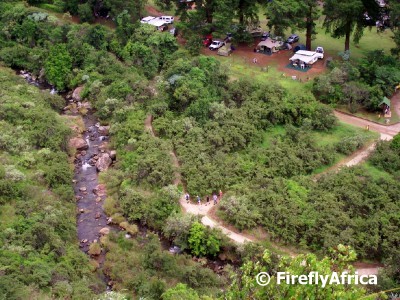 During our stay we camped at the stunning Mahai Campsite with its beautiful mountain views.  The best part of staying at Mahai is that you don't have to get into your car to reach the start of most of the hiking trails as they start right outside the campsite's gate.  All the trails and sites of the area as well as a separate post on Mahai will still be covered in future posts.
Posted by Firefly the Travel Guy at 1:00 PM