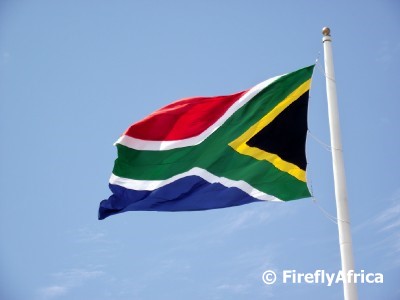 I know that this beautiful country of ours has many problems, but I am very proud to be a South African and is very patriotic.  I probably would have made a great American cause they know what it is to be patriotic.  South Africa has what must be one of the most beautiful and recognisable flags in the world.  Although there is no official symbolism attached to the flag, it does represent what is going on in the country today.  Black, green and yellow are the colors of the African National Congress which is the ruling party, while the colours of the former Boer republics flags (red, white, and blue) have also been included.  The Y shape represents the convergence of South Africa's diverse society and unity.  The red stands for bloodshed, blue for open blue skies, green for the land, black for the black people, white for the European people and yellow for the natural resources such as gold.
Posted by Firefly the Travel Guy at 2:00 PM

Email ThisBlogThis!Share to TwitterShare to FacebookShare to Pinterest
Labels: emblems