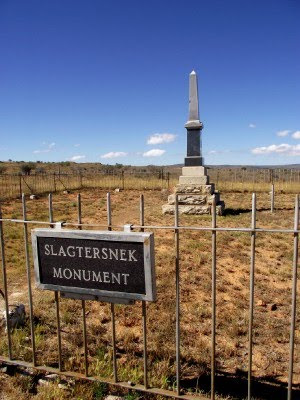 Just outside the Karoo town of Cookhouse stands a monument in remembrance of the Slachters' Nek Rebellion. The Slachter's Nek Rebellion was a Boer uprising against the British colonial power believed by them to be hostile towards the Afrikaner farmers. The rebellion came to an end on 9 March 1816 when five rebels were hanged in public at Van Aardtspos close to where the monument stands. 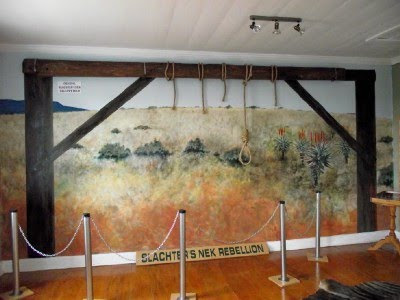 Four of the nooses broke during the procedure, as the hangman who came to perform the execution had not realised that there were five to be hung, and old rope had to be used.  The four whose ropes broke, and the public, pleaded for their lives, but Col Culyer ordered that they be hanged a second time and more ropes were obtained. The picture above is part of the Slachter's Nek exhibit at the Somerset East Museum.
Posted by Firefly the Travel Guy at 3:15 PM