This last weekend we needed to get away, so we dropped the Rugrats at the in-laws and headed out to Addo Elephant National Park. We drove through the park and spent the night at the four star Elephants Footprint Lodge in Colchester. The thatched lodge is ideally situated just outside the park's southern gate and a super spot to spend a couple of days while exploring the park and area. 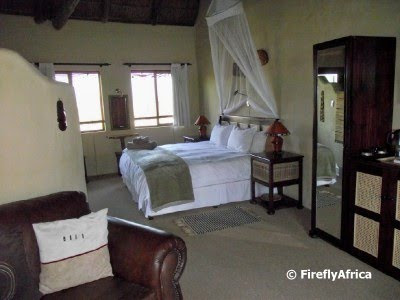 The lodge has 12 magnificent suites to relax in. The suites are so big that you won't be bumping into your partner (unless you want to) when you move from one end to the other, while the baths are big enough to have a water polo game in. There is even an (private) outside shower for those who like that kind of thing. 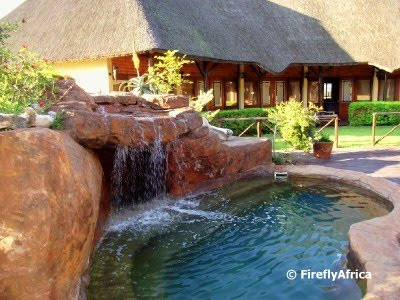 After a hot day in the Addo Elephant National Park there is nothing as soothing as washing off the dust and cooling down in the rock feature pool at the lodge. This we followed up with a romantic sunset walk over the historic Mackey Bridge spanning the Sundays River next door to the lodge. 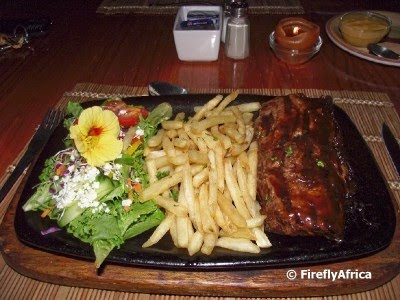 We kept the best for last. The Cooking Monster, also know as owner Geoff Applewhite, runs a restaurant from the lodge with a menu that includes kudu and ostrich steak as well as a wide variety of other dishes. We both settled for Geoff's 300 gram rump steaks served with chips and salad. The Damselfly followed it up with cheesecake and I had pancakes with apple and cinnamon. The food was so good, I nearly chewed my lips off. Elephants Footprint Lodge comes highly recommended.

Posted by Firefly the Travel Guy at 2:30 PM