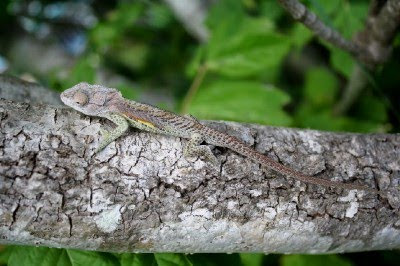 When we were small we used to find chameleons in the garden all the time, but that was then and this is now. These days I don't get to see them anywhere as much as I would like to, so it was a big surprise to find this little guy on the stoep of the Protea Hotel Tsitsikamma Village in Storms River the other day. I was really scared that somebody would step on him, so I picked him up and moved him to the garden. According to The Wildlife of Southern Africa, my nature bible, it is a Knysna Dwarf Chameleon (Bradypodion damaranum).
.
I've been away for a week and has also just about run out of bandwidth for the month, so if you haven't heard from me for a while, don't worry. I'll be back commenting by Thursday.
Posted by Firefly the Travel Guy at 9:31 PM