During our December holiday at Cannon Rocks, one of the things that I really wanted to do was to visit the Dias Cross at Kwaaihoek. Bartholomew Dias was the first (known) European to discover what is today known as South Africa. He left Portugal and travel down the west coast of Africa searching for a seaway to the East. He rounded Cape Point without knowing in a storm and first set foot at Mossel Bay in 1488, where he planted a stone cross. From here he sailed on to present day Port Elizabeth and planted a cross on St Croix Island in Algoa Bay. By this time the sailors wanted to turn back home, but he persuaded them to sail for another three day. The point where they turned around on the 12th March 1488 is today called Kwaaihoek. The remnants of this cross were rediscovered in 1938 by Prof. E. Axelson and transferred to the University of the Witwatersrand in Johannesburg. This lead to a replica of the cross being erected on the spot. 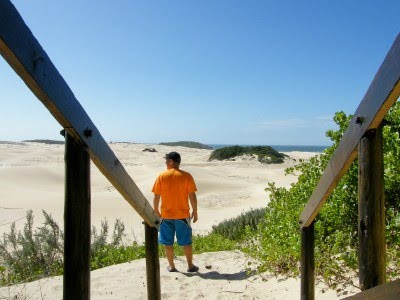 As there is quite a lot of walking involved, the Damselfly decided that she and the Rugrats would rather spend the morning by the pool than to trek along with me across the dunes and back along the beach. She did drop me off at the closest spot to the point as possible. From here the first part of my journey took me through some coastal bush before the path spewed me out on what is the far eastern section of the Alexandria Dunefields. Hitting the dunes I took a moment to contemplate, but as my lift would have been back at camp already, I pressed on. 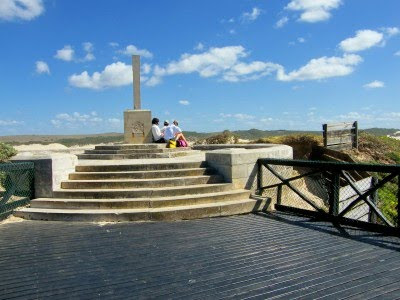 After about half and hour of following the footsteps of a couple of people that had already made the journey earlier the morning, I crested the last dune, took another sip of water (by now it was starting to get hot) and headed towards the rocky outcrop on which the cross is situated. The spot really stands out from the surrounding coastline which is mainly sand. 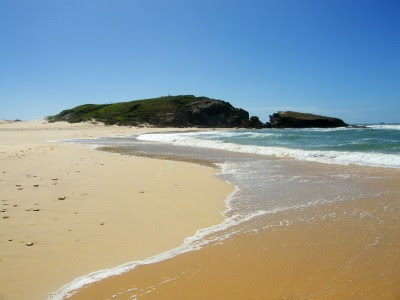 Leaving the cross behind my journey took me west along the beach and into the wind. Looking back at the outcrop you can see why sailors called the spot an false island as it does look like an island in the distance. But the pool was calling and the day was heating up, so I didn't daddle and headed towards home. About an hour or so later my journey ended at the Boknes main beach from where I called the Damselfly to come and pick me up. She couldn't quite believe that I was done already, but when I walk I don't stroll. I walk to get there and only stop to take photographs (and to take in the scenery. Or breath in the fresh air. Or to take photographs. Oh, I've said that already.) 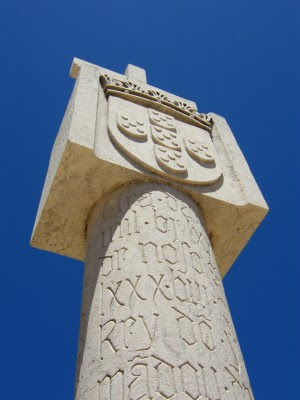 Unfortunately the cross was badly vandalised a year or so ago. It is thought that the vandals were trying to get to the metal skeleton of the cross to sell it as scrap metal. That is so sad. So as you can see in the second photo of the post, the cross doesn't have an actual cross at the top. There are also a couple of other features as well as a bronze plague missing. Above is a photo of the replica of the Dias cross that stands on Market Square in Port Elizabeth to show you what it is supposed to look like. Also follow this link to see a pic of the whole cross in Port Elizabeth.