Sun City is situated about two hours away from Johannesburg in the North West Province. The resort was opened in 1979 and was developed in the old independent black homeland of Bophuthatswana. The reason was because it contained a casino and gambling was illegal in South Africa. As was topless revue shows which was very popular at the time. Today the resort is a world renown holiday destination with 4 hotels, three of them 5 star. It also has casinos, the Super Bowl arena for shows and exhibits, some awesome "forest" gardens, a wave pool with slides and two Gary Player designed golf courses. The centre piece of the resort is the Palace of the Lost City Hotel. I got to spend four days in the resort earlier this week and over the next couple of days will show off some of the sights of Sun City. 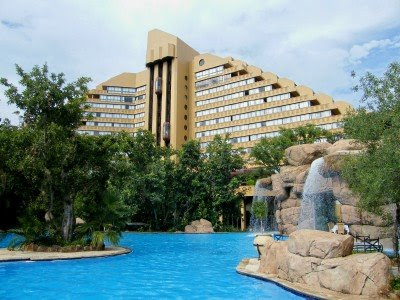 I got to stay in the Cascades Hotel which is very centrally located in the resort. The hotel is named after all the (man made) streams and waterfalls flowing through the gardens around the hotel. These gardens I will feature another day. 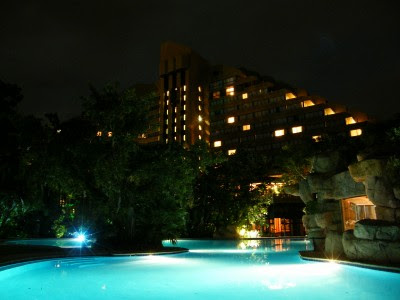 Posted by Firefly the Travel Guy at 10:05 PM