In Saturday's post I featured what I called beach treasures. These are things that you find on the beach that were either lost there, washed up by the ocean or got there in some natural or unnatural way. Today's post kinda flows out of that idea. The only thing is that today it features a mammal, a sea creature and a bird. And no, there is no punchline to it. Far from it. 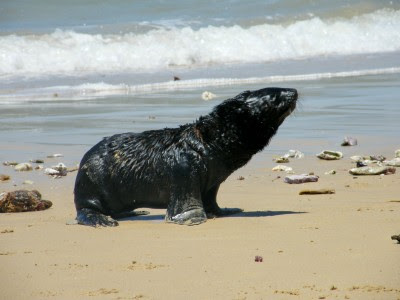 On our first visit to the shipwreck at Cannon Rocks I was so under the spell of the wreck that I nearly did not even see the baby seal swimming out of the sea a couple of metres away. There is a small flat island (more like a big flat rock) just outside Algoa Bay that is home to the biggest breeding population of Cape Gannets in the world. It is also a "breeding" area for the Cape Fur Seal who's pups are born between October and January. On Christmas Day the sea was VERY rough and high. The waves broke over most of the island and washed most of the baby seals off and away. Live seals that ended up on the beaches around the bay were captured and taken to the rehabilitation facilities before just less than 200 of them were returned to the island by boat (within 3 days of the storm) to be reunited with their moms. This little guy was one of the lucky ones. 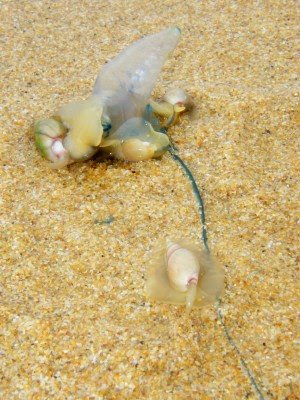 On our second last day there was a strong easterly wind. This is normally when you find blue bottles (also called Portuguese Man-of-War) on our beaches. This one became a tasty meal for for a couple of beach snails (sorry, I still don't know what they are called) on which I have done a post previously. 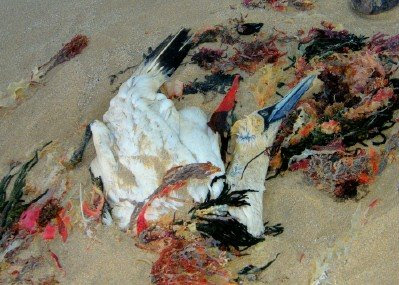 On the evening I went down to the beach to get some sunset shots I found this dead Cape Gannet that was washed up along with a lot of different sea weeds. I was touched by the scene, but at the same time I found is very interesting with the variety of colours around it, so I could not resist taking a photo before moving on.
Posted by Firefly the Travel Guy at 10:20 PM